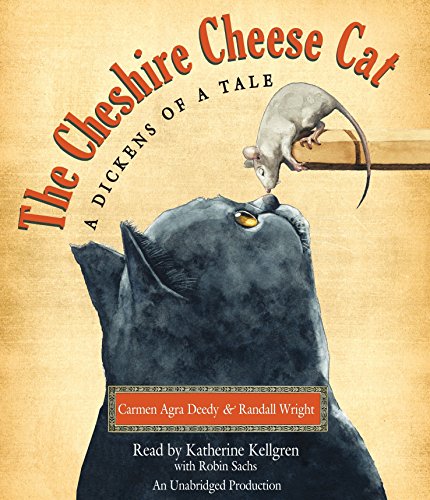 I was between audiobooks recently, and browsed through my library to stumble upon The Cheshire Cheese Cat: A Dickens of a Tale by Carmen Agra Deedy and Randall Wright.  How could I resist a story about a cat set in Victorian London?  And even better–read by the amazing Katherine Kellgren!

“He was the best of toms.  He was the worst of toms.”  So says the opening line, describing alleycat Skilley.  He sets out to improve his lot in life by slipping into Ye Old Cheshire Cheese, pub and inn famous for making the best cheese in the realm.  With a grand display of mousing, Skilley earns a place at the inn.  Except he has a secret–he hates eating mice!  Skilley forms an alliance with Pip, the leader of the inn’s mice, but this happy arrangement becomes complicated by the arrival of another (much more vicious!) cat at the inn, as well as the presence of a royal raven who insists he must be returned to the Tower, or England will fall.

This is a delightful little tale with a lovely cast of characters (including Charles Dickens in a supporting role).  The friendship that develops between Skilley and Pip is sweet and genuine, and not without challenges.  I like that the book doesn’t oversimplify the challenges of two traditional enemies forming a friendship.  They have to deal with outside prejudice, and both make mistakes along the way.  It’s a light story, but I like that more complex thread.

That complexity and depth aside, this book has wonderful fun moments.  I particularly enjoy the image of Skilley showing off his mousing skill, by trotting through the inn’s common room all day long, always with a mouse in his mouth–except that it’s Pip, every time, because it’s part of their plan.  So he just keeps catching the same mouse, again and again…

Besides Mr. Dickens, there’s a good crop of supporting characters, from the hard-faced and terrifying cook, to the hysterical servant Adele (who always seems to be the one who sees mice), to the tiny mouse Too and the wise but condescending raven Maldwyn.  There are a lot of threads of story in here, including Dickens’ writers block, all well-balanced and keeping the adventure moving quickly.

I would not recommend thinking too hard about the sanitation issues of 10,000 mice living in an inn (kind of like Ratatouille that way), but I would recommend having some cheese on hand while reading!  Or listening–because Katherine Kellgren’s reading, of course, was wonderful.  And obviously I recommend picking up this book in one form or another!

2 thoughts on “Cats and Mice in Victorian London”