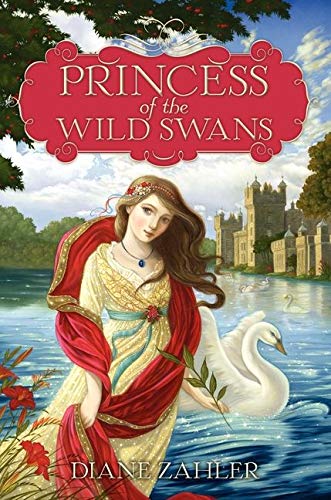 Continuing my Once Upon a Time reading (getting down to the end!), I squeezed in another fairy tale retelling with Princess of the Wild Swans by Diane Zahler.  By the same author as The Thirteenth Princess, this book is based on the Grimm tale, “The Six Swans,” and the Hans Christian Anderson story, “The Wild Swans.”  It makes things a bit less (ahem) grim in the process, but keeps good tension and magical danger too.

At the beginning of the book, Princess Meriel’s chief complaints are that she hates sewing, and that her five beloved older brothers don’t give her enough of their time.  Things take a sudden turn when her usually-doting father returns from a trip, and brings a new bride with him.  Meriel immediately dislikes Lady Orianna, and the new queen soon shows her true colors.  In order to clear the path to the throne for her own future son, Lady Orianna transforms Meriel’s brothers into swans.  Meriel seeks the help of Riana, a witch and healer, and her younger brother, Liam.  She learns the only way to free her brothers is by undertaking to sew five shirts from nettles…and it must be done before the lake freezes over for the winter and forces the swans away.

This is a firmly Middle Grade book, for the pluses and minuses that brings.  The hazards of Meriel’s task, both the necessity of sewing shirts and of remaining silent, felt rather reduced to me–the task goes with remarkable speed, and she’s able to communicate mentally (it’s a magic thing) with her friends.  As an older reader I felt a little disappointed–but I’m not the target age, and for a younger reader the task would probably seem substantial enough.  And limiting it may be best for age-appropriateness anyway!

It’s also only fair to say that if I hadn’t read Daughter of the Forest, and had Juliet Marillier’s torturous interpretation of the task in mind, I might have felt quite differently…

Zahler also brings more danger in by introducing a larger magical threat.  In addition to the task to free her brothers, Meriel and her friends have to fight darker magical creatures who threaten to break out of their own world into Meriel’s country.  It does bring back some of the tension and excitement lost through rather easy weaving!

Meriel gathers a crowd of strong allies around her, and I do like the idea that even ordinary people can make a stand against evil (see Monday’s review of Spider-Man…)  It’s also rather fun that this is a mostly women book–Meriel, her governess, Riana and her mother are all arrayed against Lady Orianna.  The princes are mostly out of the picture due to the curse, leaving Liam as something of the token male, rather than the usual fantasy set-up with one lone girl!

On the whole this was a quick, light read, possibly a little simple for older readers, but I think it would be great for a younger audience!

Other reviews:
The Book Cellar
GreenBeanTeenQueen
Good Books, Good Wine
Anyone else?

Buy it here: Princess of the Wild Swans

2 thoughts on “Princess of the Wild Swans”