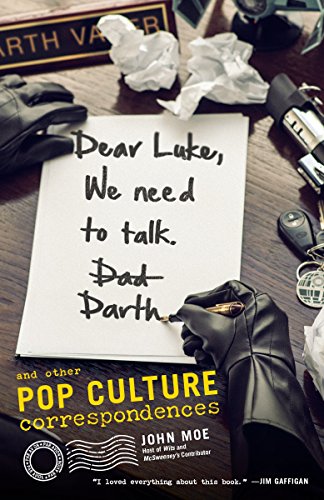 Sometimes it’s a book title that draws me in, and that was definitely the case for today’s book: Dear Luke, We Need To Talk, Darth – and Other Pop Culture Correspondences by John Moe.  It’s rather a long title, but it does pretty much encapsulate the book–a series of letters, interview transcripts and journals, putting a new slant on familiar movies, TV shows and songs.

Like anything based on pop culture, these only really work if you know the originals–but Moe seems to have chosen things that are very widely known, if I can judge from my own experience.  I had at least heard of everything that was spoofed, and had some idea of where the jokes were originating.  The book satirizes a broad range, from Jaws (the therapy journal of the shark), to Elvis (a letter from his severely depressed hound dog), to Harry Potter (the diary of an obscure student) to the Grinch (a disgruntled letter from Max).

There’s a lot that’s funny in here, although, as may be inevitable with this kind of structure, I did find the book ultimately hit-and-miss.  Some portions were very clever and funny; in other places, I thought the book went for the cheap joke or profanity punchline more than was really necessary.  I’ll grant, however, that humor is highly subjective.  I like my humor witty and clever.  Fans of, say, Will Ferrell or Adam Sandler might love the same jokes that didn’t appeal to me.

– Memo from the manager of the Hotel California, detailing some needed changes, such as “clearly mark passages back to places guests have been before.”

– Oral history of the Pac-Man ghosts, pellet-farmers who won’t let death (or Pac-Man) interfere with their work.

– A letter to Billy, the “Piano Man,” from his manager, asking him to please stop singing about guests at the bar, because it’s awkward.

– A letter from the Peanuts kids’ teacher, who’s concerned that she’s never met any of her students’ parents (but delighted that the kids can understand her despite her speech impediment).

– Letters home from a professional henchman as he cycles through employment with various supervillains.

Other reviews:
The Matthew Morgan Family Blog
With Her Nose Stuck in a Book
Anyone else?

Buy it here: Dear Luke, We Need to Talk, Darth: And Other Pop Culture Correspondences

Disclosure: I received a copy of this book for free from Blogging for Books, in exchange for an honest review.

2 thoughts on “Book Review: Dear Luke, We Need To Talk”