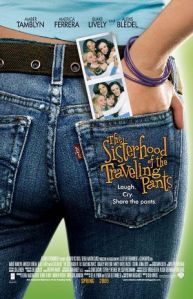 Once I finished reading the complete Sisterhood of the Traveling Pants series by Ann Brashares, I thought it would be fun to watch the two movies as well to see how they compared. I thought the first one (mostly) did very well, while the second one was (probably) a good movie, but struggled more with representing the book(s).

Movie #1 is based only on the first book, and follows the same essential plot and pattern: four best friends find a pair of blue jeans that magically fits them all, and they pass the jeans between them when they have to be separated for the summer.

I thought all four girls were portrayed well and accurately to the book, and three out of four plotlines went well too. Carmen struggles to accept her father’s new fiancée and soon-to-be-step-children, and Tibby has a heart-breaking and eye-opening summer when she meets Bailey, a twelve-year-old girl with cancer. Although things have to happen faster on screen than in a book, the emotions and essential ideas of both these plotlines came through.

Bridget falls dangerously hard for a handsome coach at her soccer camp, and up until the end this was very much like the book (except for the Hispanic coach somehow turning blond when transferred to screen…) With a little Hollywood magic, the end wrapped up more improbably and much more neatly, which was a little unfortunate but not a huge issue.

The one real disappointment was Lena’s plotline. Lena is my favorite in the books, in part because her particular arc, overcoming fear and internal obstacles to happiness, doesn’t seem to be written often. And it wasn’t really shown here—there were hints of those elements, but there was also a set of not-book-correct feuding families thrown in as an obstacle to her love story with Kostos. It’s a far more familiar and, I thought, far less interesting love story. Although to be fair, if I hadn’t had the book in mind, I probably would have accepted it at face-value just fine.

And that might be true for Movie #2 as well…but that’s a little harder to say. I should say that I did enjoy Movie#2—but it was a more flawed movie. It’s mostly based on the fourth book, but several plotlines from other books were dragged in as well, making the whole thing feel much more rushed and fractured.

Lena went through most of the ups and downs of her rocky love story with Kostos (which were spread across several books), as well as a new flirtation with a fellow art student. The story was compressed, but it actually went pretty well. If I wink at the time, it was actually more accurate (and more interesting!) than Lena’s plot in the first movie.

Tibby’s story was pretty firmly grounded in the pregnancy-scare plotline of the fourth book, and perhaps because it was really her only story, it was better developed than most of the others.

Bridget had two plotlines smashed together, an archaeological dig to Turkey (Book 4) and a visit to her estranged grandmother (Book 2) and by trying to do both, I thought they failed to really do either. Some of the themes were there, and were told fairly well, but a lot was lost.

Carmen had her Book 4 crisis of confidence and exploration of acting, and I quite liked the portrayal of her back-stabbing friend. But in a movie that already had too much going on, I wish they hadn’t tried to fit in a romance as well—which distracted from the friend story and, like Lena’s story in the first movie, it felt like a much more conventional route to go.

The movie, like the book, winds up with a group trip to Greece, and there I thought the movie did better than it had earlier—capturing the struggles of a changing, evolving friendship as the girls begin to embark into their adult lives.

Both movies were fun, mostly light teen fare, and I might have liked the second one a lot better if I hadn’t compared it to the books—although I think it might have felt fractured even without that. But they are good movies, and if you’re on the fence about the books, it might not be a bad idea to watch the first movie and decide from there!

Other reviews:
Seriesous Book Reviews
Be the Story
Anyone else?

Buy it here: Sisterhood of the Traveling Pants 1 & 2

2 thoughts on “Movie Reviews: The Sisterhood of the Traveling Pants, 1 and 2”