When I was offered a review copy of Brunette Ambition by Lea Michele (of Glee fame), it didn’t look like my type of read…but I knew someone who might like it better!  So I did accept the copy, and today I have a guest review from Diane, who you might recognize as a long-time blog reader. 🙂 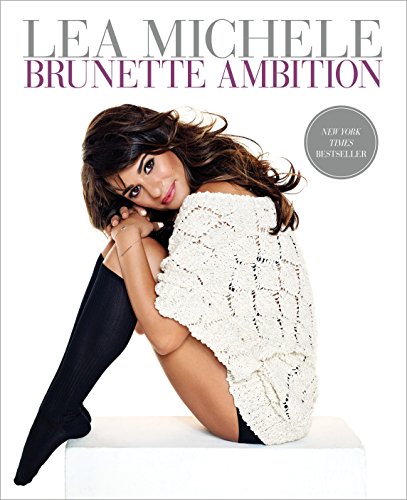 If you are a fan of the TV show Glee, about the high school glee club and its various members, then you are well acquainted with Lea Michele.  She is one of the stars of that popular series.  She has a phenomenal singing voice and flair for the dramatic.  She’s now come out with a book called Brunette Ambition.  It is aimed squarely at her fan base, young women who are teenagers and in their early 20’s.  Part memoir and part beauty/diet/exercise advice book, it takes a very positive outlook and offers background on how she got started in her career plus advice to her fans on how to best move forward on their chosen career paths.

The book can be used as a reference for Michele’s advice on diet, hair, make-up, clothes, etc.  Her thoughts on these topics are really rather conservative, suggesting healthy eating, more nights in than heavy partying, exercises to do in your own backyard, beauty tips that rely strongly on common sense, and buying timeless clothing styles for your closet.  She also provides step-by-step make-up and hair style tips.  These thoughts are useful, I’m sure, for her demographic, who may want to emulate her.

What I liked best about the book was her chapter on “The Biz.”  Michele was a child actor, living in New Jersey and commuting to work in New York City on Broadway at a young age in various roles from the age of eight.  Instead of simply providing a chapter or two describing her life prior to Glee, she divides her acting jobs into segments that describe lessons learned that her fans can apply to their own careers.  For example, when she worked as one of three girls who rotated in the parts of Young Cosette and Young Eponine in Les Miserables, she tells her readers that she learned about basic professionalism – being on time, taking care of herself so as not to get too tired or sick, and to get along with, and work well with, others.  When she played a part in Ragtime, she says she learned about the craft of acting, teamwork, and perseverance.  Each stage of her career taught her different lessons.  These can be applied to any career.  I thought this was a very good way to talk about her own life but also encourage her fans in their goals.

Michele discussed her family, friends, Glee cast mates, and acting career in the book.  The one glaring omission, I thought, was any reference in depth to her former boyfriend, Cory Monteith, who tragically died of a drug overdose in July 2013.  Toward the end of the book, when she talks about her love for her Glee costars, she says, “And then there’s Cory, who played such a large role in the show and also in my personal life . . . these past five years have been filled with the greatest ups, some difficult downs, and then, of course terrible tragedy . . .”  That’s about it, though, which was surprising to me, since she did discuss her relationship with him in the media elsewhere.  I can only surmise that this book was meant to be a positive, “fun” book for her fans, to encourage them in their own lives, and she didn’t want her personal tragedy to intrude on the theme of the book.

Overall, I would recommend this book for someone who is in high school or starting college who may enjoy a mix of self-help tips and some career encouragement from an actress and singer who has worked hard and achieved phenomenal success.  Lea Michele has a lot to say to other young women about what it takes to find their own path to success in whatever career they choose.

Other reviews:
Once Upon a Bookshelf
A Midsummer Night’s Read
Pretty Bookmarks
Anyone else?