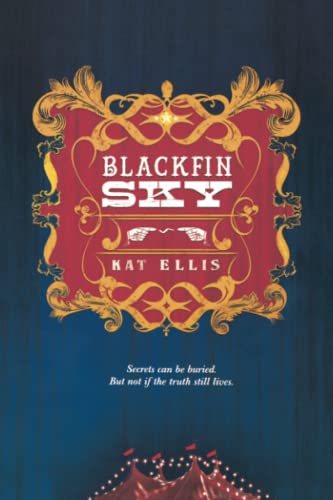 I didn’t plan to do a “dead heroine returned to life” theme this week…but I seem to have stumbled into one! Blackfin Sky by Kat Ellis begins with just that premise.

Sky Rousseau hurries in late one morning to her high school, to be greeted by staring faces and the news that she died three months earlier. Sky remembers the last three months as perfectly ordinary—but her family, friends, the cute boy she’s been flirting with, and everyone else in town remembers that she drowned at Blackfin pier the night of her sixteenth birthday. Blackfin, a tiny secluded town, has never been quite normal, and now Sky has to unravel some of Blackfin’s and her family’s secrets to find out what happened, and how to defeat the danger still threatening her.

I’m debating how much I should reveal of this story—because I thought the novel got much better once a few of the mysteries were cleared up. To hit a middle ground, suffice to say that Sky discovers she has special abilities, and using them leads her to answers and gives her power to fight the villain those answers reveal.

I find myself with a kind of middle ground reaction to this story too. It’s weird in a cool way, there are some really interesting concepts and magic and settings—and something a little bit off too.

Let’s get the “off” part out of the way first, which makes sense too because it’s stronger in the first half. I never quite believed people’s reactions to Sky’s return from the dead. You see, she didn’t just disappear and return—her body was found, identified and buried. The town in general seems pretty reasonable in their shock (although the local police is astonishingly uninterested in investigating), but Sky’s family, friends, and crush just don’t react enough. They’re not shocked enough, suspicious enough, joyful enough, asking questions enough… No one becomes suddenly clingy, insists on a trip to the hospital, tests her to see if she could be an imposter, makes any kind of “I never told you and now I have the chance…” confession, etc.  There’s some initial, brief freaking out, but then everyone seems willing to pick up their relationships with Sky exactly as they were, and that just doesn’t ring right to me.

To a certain extent, Sky’s impossible return to life (and everyone’s acceptance of it) is explained away as “things are always weird in Blackfin anyway.” Which doesn’t feel like enough explanation, but does segue nicely into the better parts of the book.  I wish there had been more about Blackfin and its oddities, because the hints are tantalizing–like a wishing well that will steal all the coins from your pockets if you get too close, or a haunted windmill that turns to watch people instead of turning with the wind.  It’s a little weird that the town (and the larger world) doesn’t look for explanations for all this–or accept that they’re an enclave of magic, Diagon Alley-style.  There seems to be a middle ground acceptance there too.  Everyone in town knows things are weird and doesn’t ask too many questions–and I’m mostly willing to just go along with that premise.

Once we get into the more heavily magical parts of the book, character reactions and magical events become more plausible (in an internally-consistent, magic world kind of way) and the book gets more exciting too.  We get to visit a rather creepy circus, explore several kinds of magical talent, and unravel some mysteries.

The story wraps up with a reasonable amount of resolution but lots of open space for a sequel.  Assuming that a sequel would pick up already in the more-heavily-magical phase of things, I’d be very interested to read more–and maybe find out a little more about some of these cool concepts and settings!

Disclosure: I received a free copy of this book from the publisher in exchange for an honest review.

Other reviews:
Simon P. Clark
BadgerBooks
The Book Nook
Anyone else?