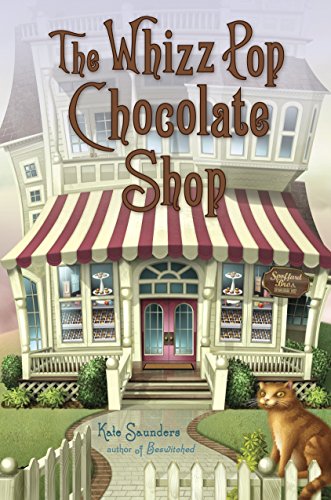 The Whizz Pop Chocolate Shop by Kate Saunders is a middle grade novel about magical chocolate—but it reminded me more of cotton candy, light and fluffy and insubstantial,

When Oz and Lily, eleven-year-old twins, and their family move into an abandoned chocolate factory, Lily is delighted to meet Demerara, a magical cat. Demerara tells them about the history of the chocolate factory, founded by three brothers who combined chocolate and magic. One of the brothers, by virtue of an immortality chocolate, is still alive and intent on stealing secrets his brothers left behind, to sell to a terrorist group. Demerara also happens to be a secret agent for the MI6, the British secret service, and needs Oz, Lily and their neighbor Caydon to use their latent magical ability to help on a secret mission.

This really is a cotton candy book, fun and entertaining with no real substance or depth. I don’t think it would have wide appeal for adults, but I can easily imagine middle grade readers loving it.

The entire book is pretty wild, over-the-top and ridiculous, mostly in a good way.  Any difficulties are quickly smoothed over and details are avoided whenever possible. The MI6 somehow makes Oz and Lily’s parents utterly unconcerned about whatever it is their children are up to (with a combination of cover stories and magic), neatly getting parental supervision out of the way. We don’t have any detail about the supposed terrorist organization MI6 is fighting; they’re entirely just a shadowy, vaguely evil entity.

This points to where I (and probably other adult readers) had some trouble with the book. The focus, or goal of the book was too vague and too changeable for me. There’s the terrorist group, one evil chocolate-maker, a kidnapping, and a threat to the children’s family, so there’s plenty going on—but these don’t all tie together very well, and the focus of the danger changes too unexpectedly at times.

It’s like cotton candy—wisps that don’t always hold together very well, but on the other hand, are bright, sugary and fun in themselves. Younger readers would probably worry less about the larger arc of the story, and simply ride along for the series of adventures.

And I am sure younger readers would delight in the magical elements. Demerara is wonderfully vain, snobbish and proud (she is a cat after all), leading to some ridiculous moments as she has Lily paint her claws or cover her fur in body glitter. There’s also a talking rat and an invisible ghost elephant in the mix.

Lily, Oz and Caydon are all convincing characters, good kids who aren’t too good. Lily is the most likely to be relatable, dealing with dyslexia and feeling overshadowed by Oz, a genius violinist. I like that all the kids get to have a part in the final victory, using their talents and overcoming their challenges.

So this one gets a limited recommendation–only good for adult readers if you’re looking for something very light, but probably delightful for a younger audience!

Other reviews:
The Bookwyrm’s Hoard
Jen Robinson’s Book Page
Booklady’s Booknotes
Anyone else?