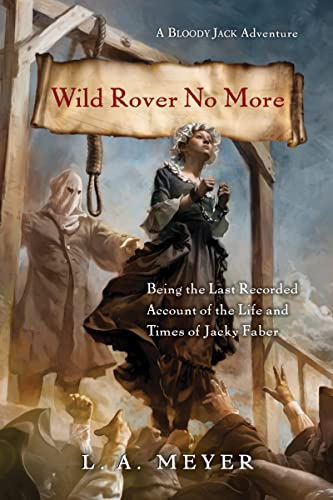 I have been reading the Bloody Jack series for at least ten years, and with its release last month, I have finally read the last book in the adventure: Wild Rover No More by L. A. Meyer, “the last recorded account of the life and times of Jacky Faber.” And we can be sure it really is the end–sadly, L. A. Meyer died this past summer, though I’m glad for him (and us!) that he was able to finish his series.

This final book was, as the series has always been, a lot of fun to read, with humor and hijinks galore.  It was also plagued by some of the same issues that I’ve seen in the last few books of the series.  So–I think I’ll talk a bit about the book, a bit about how it stands as the final conclusion, and then some thoughts on the series on a whole.

This book opens a few months after the conclusion of Boston Jacky, and the lingering crises of that book are tidied neatly away within just a few chapters.  New crises arise when Jacky is framed for espionage and must once again go on the run, fleeing Boston first for a job as a governess, and then to join the circus.  But the law is catching up to her, and soon her belief that she was always meant for hanging will be sorely tested.

The positives: I always enjoy visiting Jacky again, for all her irrepressible impetuosity, and I especially enjoyed the time she spent as a governess.  It was fun to see her in a more domestic role (but still running the show, of course!) which isn’t a situation she’s been in much before.  The story takes a turn to the more serious and poignant when the law catches up to Jacky, and that proved an exciting page-turner (even if I was pretty sure about how it would all turn out–and I was right!)

The issues: Similar to Viva Jacquelina, this book moved too fast for me.  Jacky barely settled into one situation before she was flying off to the next one, so that the new characters she meets have very little time to develop, and the relationships she forms have even less (though at least the romances were kept down to just one new paramour to add to the long line).  Both these books made me nostalgic for book two, The Curse of the Blue Tattoo, a good thick installment that Jacky spends all in one place.  The circus also felt contrived–on the one hand, it’s the natural development of all Jacky’s wild shenanigans, but on the other hand, it pulls a tendency towards the absurd into something that feels almost cliche.  I mean…she ran off to join the circus?  Really?

As to how this serves as a conclusion (Spoilers Ahoy!)…it works, and it doesn’t.  I’ve been pretty sure for several books now that there was just no way Meyer was going to be able to end this that would make me happy, so that should probably be kept in mind as influencing my opinion here!

I’ve written before about my issues with Jacky’s relationship with “her one true love” Jaimy.  In brief, I’ve been convinced he doesn’t really understand her since book two (they’ve never adequately addressed that), and I’ve been disgusted with Jaimy’s (era appropriate, I will admit) double-standard regarding, ahem, friendships with the opposite sex for him and for Jacky (again, not really every addressed).  At the end of Boston Jacky, it looked like they really might be over for good…and at the beginning of Wild Rover, they reconcile very quickly, with no real resolution for the very real problems they have.  Which is all a long way to say that, what mostly makes this a conclusion, is that Jacky and Jaimy finally get together.

And since it’s been pretty obvious for a long time that Meyer wasn’t going to introduce a serious rival who might oust Jaimy, and since I’ve been over their romance for over half the series, well, there was no winning on that one!  For the Jacky/Jaimy fans, I’m sure this will be a delightful conclusion.

This book didn’t really conclude the adventures in any other way.  The readers got a more dramatic near-ending for Jacky, but as things play out, in the long run it will only be yet another gale in Jacky’s stormy life.  Oddly, Boston Jacky seemed more like it was bringing Jacky towards settling down than this final book did!  This one was more of another adventure, with a sudden spate of marrying-off near the end.  On the other hand, I do rather enjoy a slightly more open-ended conclusion…because who could believe that Jacky Faber would ever really settle down?

Finally, thoughts on the series on a whole?  I highly recommend it!  Jacky Faber is one of my very favorite heroines, for all I want to shake her sometimes, and she has a long series of wonderful adventures.  That high recommendation comes with a proviso–it’s an absolutely brilliant series for eight books.  Part of me wishes the series had ended (or gone in a very different direction) at the end of book eight.  The remaining four, while still a good bit of fun, have more issues with lack of depth or contrived plotlines.  They’re probably still worth reading if you’ve gone through the first eight, but I’d also recommend adjusting expectations a bit.

All the same, that’s not a bad run for a series that, certainly for the first 2/3, is one of my very favorites!  If you haven’t read it, pick up the first one and go adventuring with Jacky. 🙂

Other reviews:
In Bed with Books
Bibliobrit
Kid Lit Geek
Anyone else?

One thought on “Book Review: Wild Rover No More”