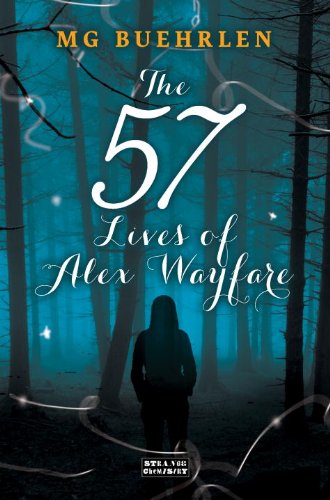 After falling madly in love with the reincarnation premise of My Name Is Memory, I of course had to try The 57 Lives of Alex Wayfare by M.G. Buehrlen.  And now that I have, I feel…deeply mixed.  I enjoyed the read!  But not without reservations.

Seventeen-year-old Alex Wayfare is living her 57th life.  She doesn’t know that–all she knew is that she sometimes has disturbing, vivid visions of past times–until she meets Porter, a friend from her previous lifetime who can explain the truth.  Alex is a Transcender, with the ability to Descend into her own past lifetimes by passing through Limbo.  Porter serves as Alex’s mentor and her guardian, protecting her from an enemy made in her previous lifetime.  But Porter won’t tell Alex everything and mysteries abound…and there’s this boy.  Alex meets Blue (not his real name) first in Chicago in 1927–but then she bumps into him again in 1961–and in 1876…

So to begin with: very cool concept here!  For science fiction, this was light on explanations, but I was willing to take it largely as though it was fantasy and not ask too many questions, and that seemed fine.  The idea of all these lifetimes in different centuries is so intriguing, and the shadowy forces stalking Alex are suitably sinister.  And if you like your action up-close and out of the shadows, there’s plenty of that kind of action too.  (Including some violence, if you don’t like that–it’s about on the level of Hunger Games, I think.)

And yet.  For all that was cool here, some elements didn’t feel fully developed.  Part of this was my expectations–because the truth is, this is much less reincarnation and much more time-travel with a body-snatching element.  When Alex Descends into her past lives, she doesn’t get any memories from those lives, and from what she’s able to gather, her past “selves” have been very different people from her.  (Which does bring in a rather hypocritical element when she criticizes another Descender for stealing someone else’s body–and how is what she’s doing really different in any meaningful way?)

Time travel is not by any means a bad premise…but I feel a little cheated anyway, because Porter had to mention that Alex has past lives stretching back to the fifth millennium BC.  That’s 7,000 years…and yet, apart from very brief glimpses, we only travel within the last 150 years, in the United States (and I think Denmark once.  Maybe).  Such missed opportunities!!  This is the first book of at least two (more on that later) so there could be more coming…but it still feels like there could have been so much more here!

So much for premise.  As to the characters–other reviewers have had some problems with Alex.  I found her likeable enough, irresponsible at times but largely well-meaning, struggling with identity and sometimes confusing priorities, but in a very teenager way.  Except she’s also really, really clueless sometimes.  There were quite a few moments where she’s whining about something not making sense, while I want to shake her and say, “Oh come on, it’s obviously XYZ!”  To be fair, I was wrong once or twice (and right more often), but I still feel she should have been coming up with theories, even if a couple were later disproved.

I have one theory that, quite frankly, was all I really wanted to find out about in the last couple of chapters (either I’m right, or there’s a massive red herring here) and…the book ended about a page before a reveal.  Seriously.  It’s like a season finale where the character opens a door–and we have to wait until the next season to find out what’s inside.  It was that close to an answer (unless more monkey wrenches are coming, of course).

So I guess I’ll be reading the next one…which I’d probably do anyway, to see if a second book takes on some of the opportunities this one missed!

Other reviews:
Charlotte’s Library
The Social Potato
The Flyleaf Review
Anyone else?

Buy it here: The 57 Lives of Alex Wayfare

One thought on “Book Review: The 57 Lives of Alex Wayfare”