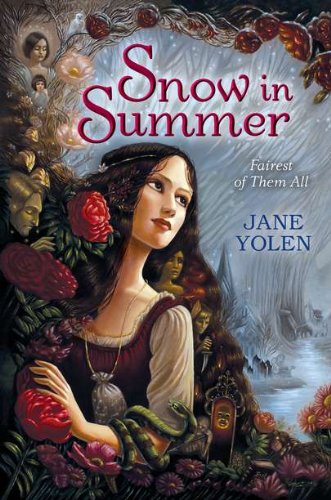 Despite mixed feelings about Curse of the Thirteenth Fey, I decided to give another Jane Yolen fairy tale retelling a try: Snow in Summer, a retelling of Snow White. And…I have mixed feelings! But in a very different way.

Snow in Summer (called Summer for day to day) lives in the Appalachians in the 1930s. Her mother dies when she is young, and her father retreats into himself, with little regard for his daughter or anything else. But at least Summer has Cousin Nancy, her godmother who looks after her in her father’s distraction. Until one day Summer’s father meets a mysterious woman and falls under her spell. Summer wants to love her new Stepmama, even if she calls her Snow, assigns chores, and bans Cousin Nancy from the house. But Summer’s father grows ever more listless, and Stepmama has plans for her stepdaughter.

There’s a lot that’s really intriguing here. Yolen played with the elements of the original fairy tale to create something that’s familiar and new. She weaves in the Appalachian setting and culture, while somehow making it work seamlessly with the presence of a magic mirror. Snow White’s father has always been strangely absent in the original, and Yolen builds that into a tragedy of a father who is physically present but emotionally inaccessible to his daughter.

Snow in Summer herself is a sweet and sad character. She’s about twelve years old for a large portion of the book, and is very much a child trying to deal with a scary situation beyond her ability to fix. She wants so much simply to be loved by the adults in her life, who consistently fail her or worse. Because of age and circumstance, she’s largely powerless for most of the book, which I think would frustrate me in most books but here was all too believable, and so just sad.

And I think it’s the level of sadness that first leads me to mixed feelings. Abuse and neglect come up in fairy tales (and retellings) a lot, but it’s usually vague and couched in familiar images of artfully ragged clothing and some floor scrubbing. I felt Snow in Summer went to a more uncomfortable place, with Stepmama abusing and neglecting Summer in ways that were recognizable and, today, reportable to Child Protective Services. I actually checked the spine of my book at one point to confirm this really had been labeled as a children’s book. It’s not that there’s any particular moment that’s so horrible it becomes inappropriate for kids, but the overall treatment of Summer adds up to something pretty disturbing.

It’s possible this would be less disturbing to children because they’d read it in a different way than I did, but I wouldn’t swear that all of the discomfort would pass over kids’ heads. If anything, I think the obliviousness (and through it, tacit approval) by Summer’s father might almost be more unsettling to children. I also read some definite sexual threat undertones in Summer’s encounter with the Hunter, though those weren’t overt and probably would go past kids. I won’t say absolutely that this isn’t a kid’s book, but use caution with younger readers.

The book builds slowly up to a disturbing (but well-executed) place by the time Summer escapes from the Hunter…and then I have mixed feelings on another level. Stepmama’s magic, including the mirror, strange though they were, fit somehow into the cultural setting. The sudden arrival in the story of a family of very short men who happen to live in the woods and mine for jewels (and have thick German accents no less) felt a good deal more forced. The final resolution felt rushed, and while I can’t exactly define what questions the book left me with, it still doesn’t feel like I got quite enough answers.

So…I am a bit mixed, although most of the book was good, if darker than I anticipated.  So I guess that’s a…semi-recommendation? 🙂

Other reviews:
The Book Smugglers
The Ranting Dragon
Pages Unbound
Anyone else?

Buy it here: Snow in Summer