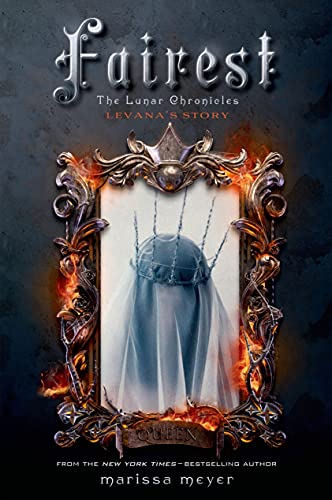 I really, really, really want to read Winter, the final book in Marissa Meyer’s Lunar Chronicles Quartet.  But it won’t be out until November.  So in the meantime, it was some consolation to read the prequel, Fairest, providing the backstory of the terrifying Lunar Queen, Levana (and, incidentally, Winter’s stepmother).

I’ve reviewed the first three books in this series (Cinder, Scarlet and Cress).  It’s a sci fi series, where a Lunar kingdom is hostile towards Earth, and fairy tales are played out in clever ways with cyborgs and satellites.  This one…is the story of Snow White’s stepmother.

Fifteen years old when the book opens, Levana is the unwanted, disregarded younger princess, always in the shadow of her cruel and shallow sister Channary. Levana dreams of attaining renown, respect…and the eye of Evret, a handsome palace guard.  But Evret is devoted to his beautiful wife, and they’re expecting a child.  This doesn’t interfere with Levana’s belief that they’re fated to be together, and she’ll use all her royal power and her ability to manipulate minds and emotions to seize what she wants–beauty, Evret, and the throne too.

This is like a cracked-mirror version of the other books, focusing in on one teenage girl as the…protagonist.  Because I really can’t describe Levana as a heroine! Meyer does a masterful job of bringing us into Levana’s life, showing the world through her eyes, demonstrating how utterly sad her life is…and yet really not making her sympathetic!

A friend of mine described Levana as “having the emotional empathy of a gnat” and I think that about captures it.  It’s clear that Levana has no concept at all of really caring for someone else, and can’t fathom that anyone else could have those feelings either.  On some level, I don’t think she sees other people as real at all.  It’s chilling, all the more so because she thinks she wants love and a family…but has a hideously twisted idea of what that even means.  And it’s sad, because it’s so apparent how the Lunar Court she grew up in twisted her around so badly.

This is a brief book (although it spans about 10-12 years), which is good, since I don’t think I could stay in Levana’s head for long!  As it is, it’s a page-turner and a very quick read.  It’s clearly written as a companion to the quartet, providing hints and background about the events of the other books, and for Cinder, Cress (you have to watch closely for her!) and Winter.

It was fascinating to see the (awful) Lunar Court, and also to learn more about the Lunar ability to create “glamours,” false impressions of their own appearances.  How weird would that be, if everyone around you could (and did) alter their appearance at will?  We’ve only seen this from the outside (mostly) before, and it was so intriguing to get inside Levana’s head to learn more about this magical (if couched in science) ability.

Possibly this has made me want even more to read Winter, now that I’ve met Princess Winter as a child.  She doesn’t have a big role here, so maybe it’s more significant that I met her father…and now I’m very curious to see how she grew up!  So it’s…nine months until November?

Other reviews:
Xpresso Reads
Rabid Reads
Out of Time
Anyone else?