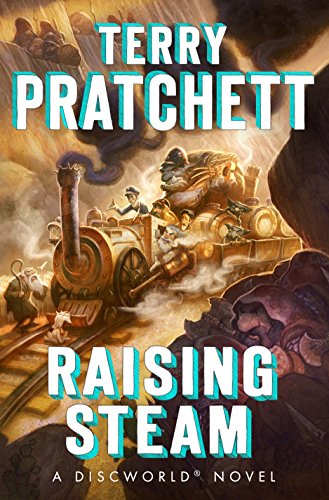 I’m closing in on my 30th Discworld read!  I just finished my 29th, Raising Steam, also the most recent in the series.  After 29 books, I can say with confidence that Discworld books are amazing, hilarious and brilliant–except unfortunately, this particular one wasn’t.  Still a decent read, but not quite on the level I look for from Discworld.

I’ve really fought not to admit that Discworld may be going downhill…and it’s because I know Terry Pratchett has been diagnosed with Alzheimer’s, and that makes me so sad, and I’m so impressed that he’s still bringing out new books.  I Shall Wear Midnight and Snuff both featured…some choices I probably wouldn’t have made, but they were choices, it’s a preference thing, and they were still very good books.  Raising Steam, however, has some real problems.  It’s not a bad book–but the past 28 set the bar very high, and this book didn’t manage to scramble over it.

As you might guess from the title, in this installment steam power comes to Discworld.  Specifically, an engineer from the hinterlands of Stolat has invented a steam-powered locomotive, and brought her (always “her”) to the big city of Ankh-Morpork.  He lines up an investor, and both the world and city tyrant Lord Vetinari begin to take notice.  Vetinari summons up Moist von Lipwig, one-time conman and current Chairman of the Royal Bank, and sends him as a government representative to grease wheels as-needed.

It’s a promising-sounding premise…but there isn’t enough conflict.  Trains are coming to Discworld and everyone pretty much thinks it’s a good idea.  Except for some dwarfs who are grumbling about change and some racial tension, but those grumblings don’t really coalesce into anything that feels significant until halfway through the book at least.  The last quarter or so is much stronger because there’s an actual fight on, but that’s a long time to go with everyone basically getting along and laying rails.

So that’s the first issue.  The second is…the characters are too reasonable.  My favorite Discworld books (and comedic stories in general) always give us one sane person to chart us through the madness of everyone around them–it’s why I love Tiffany Aching, Commander Vimes, and in fact, Moist von Lipwig in Going Postal.  But Moist is best when he’s dancing madly to keep everything around him from exploding, and this book didn’t make him work hard enough.  And more importantly, it didn’t give him a funny enough supporting cast.

Lord Vetinari has a big part here…great character, but not a barrel of laughs.  We also get a big supporting role from Commander Vimes, who I love except…he’s another straightman, not the comedian.  Both the engineer and his investing partner are a bit quirky, but they’re just not in the same category as the ancient Junior Postman Groat and his post office (literally) full of undelivered mail (Going Postal), or Topsy Lavish who makes her dog, Mr. Fusspot, the heir to the Royal Bank (Making Money).  Don’t get me wrong, it’s not that there was nothing funny in here…it just wasn’t Discworld-level funny.

Although it did finally make me laugh out loud on page 336, when “the commander went, as they say in Ankh-Morpork, totally librarian on them.”  (Which makes a little more sense when you know the Librarian is an orangutan…it’s complicated.)  And I smiled on other pages too, which is more than can be said for plenty of books.  But I expect a lot from Discworld, I’m afraid.

If you like Discworld, this probably is worth picking up.  But I wouldn’t make it a high priority among the forty (!) Discworld books.  I’ll still read the next one if there is one, I’m still hoping this one was an aberration and not a trend, and I still very highly recommend the series.  But try a different book!

Other reviews:
A Dribble of Ink
Girl with Her Head In a Book
The Book Blog of Evil
Anyone else?

(but really, buy this one instead)