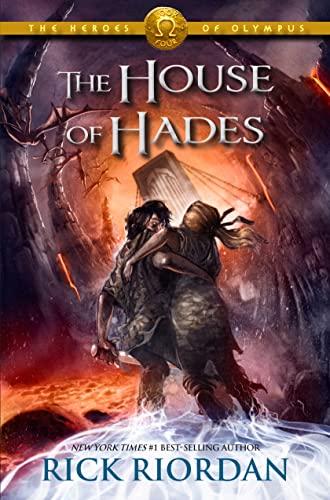 I’m still continuing my way through Rick Riordan’s Heroes of Olympus series, and have finished through the fourth one, The House of Hades. The series continues to be excellent fun! Spoilers to follow for the earlier books…

The last book ended with Percy and Annabeth falling into the pit of Tartarus, the darkest, deepest, most horrifying part of the underworld. Their friends must continue their quest to reach the House of Hades and close the Doors of Death, so that monsters can be killed and Gaea, the terrifying Mother Earth, can be prevented from rising up and destroying humanity. Percy and Annabeth, meanwhile, are searching for the Doors in the Tartarus, to complete the other half of the quest and close them from that side.

Let me just say first, while we’re up here at the top near the image–I love this cover.  That’s Percy and Annabeth there, and I love that you can’t really tell who’s holding up who.  Because they both lean on each other throughout the book.  Which always makes for a good romantic pairing. 🙂

All right, on to the text…  This was a big character growth book. Frank, the shape-shifting son of Mars, grows into his strength as a warrior. Hazel embraces new abilities and new confidence.  And Hazel and Leo come to a new understanding that helps resolve their uneasy triangle with Frank—and wise-talking Leo gets a more serious side, and a chance at an eighth-wheel to balance out his seventh-wheel status. By which I just mean he finally gets a bit of romance of his own!

Supporting characters Nico and Coach Hedge also get some new growth. We find out why Nico is so much a loner and so uncomfortable around others. It’s not just because he’s a son of Hades—he’s carrying another burden too, and while I don’t want to give too much away I’ll just say it increases the really awesome amount of diversity Riordan got into this series. And Coach Hedge, the pyro and missile-happy satyr, reveals a surprising softer side.

Speaking of satyrs, I was delighted by a cameo from Grover, my favorite character of the Percy Jackson series. I would have liked a longer appearance, but it was still nice.

So all of these things are cool…but I liked Percy and Annabeth’s side of the story best. This is really two parallel stories that we keep jumping between, and the adventure aboveground was good (and great character growth) but the adventure in Tartarus brought the series to a whole new place.

When monsters are killed in Riordan’s world, they’re banished to Tartarus—which means Percy and Annabeth suddenly have to deal with consequences of choices they made years earlier. This becomes the exact opposite of the mindless, meaningless violence that shows up in books and movies a lot. At one point Percy and Annabeth have to experience the pain of specific people they had killed. At another, they’re inflicted with curses from people they destroyed. Don’t get me wrong, they’ve been fighting in self-defense all through the books…but there have been a lot of monster-deaths, and it’s good to see Riordan look at the toll of that.

I’m all the more sure this was a deliberate theme because a very different consequence comes up too—Percy left someone behind in an earlier book and forgets about her. He gets reminded here, and the reader gets to see what happened to her too.

The journey through Tartarus brings us another theme too, about how we choose who we will be. In Riordan’s deft ability to blend humor and drama and action, this theme is most eloquently shown by Bob the Titan. He’s a giant who lost his memory (thanks to Percy) and who Percy dubbed Bob. Bob is funny and sweet and not very smart—but when his original memories start surfacing, he has very serious choices about who he wants to be. And Bob, of course, is another example where Percy has to face the results of his unthinking actions in the past.

The series of monster battles finally got a little long for me here—above ground, they’ve been flying around in the Argo II for a solid two books now—but the way the characters grow and especially the deeper explorations in Tartarus brought the series to a wonderful new level.

One more book to go!

Other reviews:
Blog of a Bookaholic
YA Midnight Reads
Snuggly Oranges
Anyone else?  Tell me about yours!

Buy it here: The House of Hades