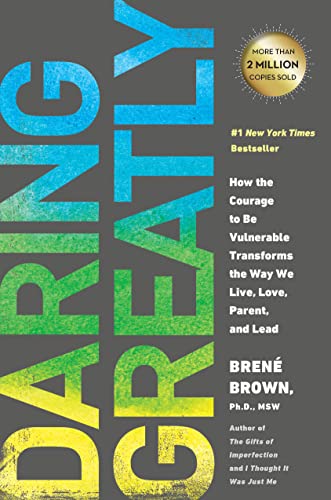 It’s rare for me to read a book that makes me want to rush out and tell everyone I know to read it—and even rarer with nonfiction. But that happened with Daring Greatly by Brené Brown.

How I came to this book is a story in itself. You may have heard of Brené Brown, and if you have, it’s probably because she has a wildly successful TED talk on vulnerability, with a follow-up talk on shame. Her first one is, I believe, in the top ten most popular talks on TED (which is saying a lot) with over 22 million views. I watched the talk (for the first time) years ago, and vaguely meant to check out her books some time.

And then my book club chose to read a book on rejection: Rejection Proof: How I Beat Fear and Became Invincible Through 100 Days of Rejection. Suffice to say, the author became a supposed “rejection expert” through a series of self-devised experiments setting himself up for rejection. Except. All of these experiments involved no investment, had nothing at stake, did not involve anyone he cared about, and didn’t even put any of his identity on the line. In other words, he managed to take all the vulnerability out of rejection, which seems to rather defeat the point. I got Rejection Proof from the library and did not choose to buy it. But I went out and bought Daring Greatly.

To put it briefly, everyone experiences vulnerability, no one likes it, and yet it’s a prerequisite for connection and whole-hearted living. Brené explores what vulnerability is, how it plays into our relationships, and all the ways we try to avoid vulnerability—and why that doesn’t work. She also discusses shame and worthiness, and how essential it is to believe that we are worthy.

I’ve found that I like philosophical books from type-A perfectionist women who do too much (and are now trying to learn something different). I also appreciate books from people like Thich Nhat Hanh, but the fact is—he’s a monk living in a prayer community. Brené Brown, on the other hand, is coming from where I am.

My favorite section (also one of the longest) was on Vulnerability Armor. One of the major ones? Perfectionism. If we’re perfect enough, it’s supposed to protect us from vulnerability and make us worthy. That doesn’t actually work. But do you know how many years I never missed a scheduled blog post? (Three posts a week, for over four years.)

Another major armor is Numbing. My first thought was that this would be less relevant to me—I don’t drink or smoke or do drugs. But the biggest form of numbing? Busyness. Staying so busy we never have time to stop and think about our lives. That was the point when I decided that this book could be helpful to just about everyone I knew. I don’t mean that everyone I know is desperately avoiding vulnerability—but most people I know are too busy (and me too—again, three posts a week for four years…)

And I think the real point here is that these topics are universal. They relate, more or less and in different ways, to everyone.

And if you know me in person, well, I do have a copy…but I’m a little reluctant to loan it out. Partially because it’s one I’d kind of rather keep around. But since we’re talking about vulnerability, I’ll go ahead and admit this—that I’m a little worried about how vulnerable it would make me to let someone see which parts of the book I highlighted!

Other reviews:
The Pioneer Woman
Pop and Banter
Tell Me About It, Sister
Anyone else?