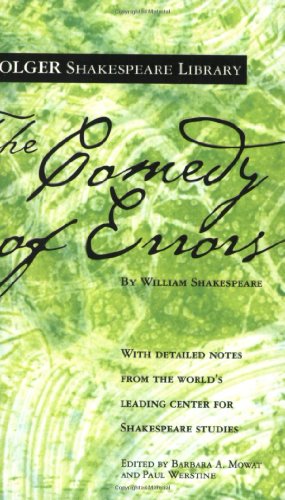 Anticipating my Shakespeare reading goals, I hauled out my Complete Works and checked off all the plays I’ve read and/or seen, to see what was missing. I found out there were four Comedies and four Tragedies I’ve yet to encounter—and then I put the Complete Works away and requested a paperback of The Comedy of Errors from the library. Because I like footnotes and books that don’t weigh far too much!

I knew vaguely that The Comedy of Errors was Shakespeare’s twins story…and that was about all I knew. Sure enough, the story is about two sets of identical twins, each separated from his brother at birth. Antipholus of Syracuse and his servant Dromio of Syracuse arrive in Ephesus, looking for their lost brothers…and are swiftly mistaken for Antipholus of Ephesus and his servant, Dromio of Ephesus. There follows a great deal of confusion and mix-ups as all four twins keep encountering the same people but not each other.

I think this is basically Shakespeare’s slapstick comedy. Both Antipholuses keep beating on both Dromios, and the whole thing is far more farcical and far-fetched than Shakespeare’s usual fare. Though in a way, that’s impressive—that the same person wrote a play this absurd, and wrote, say, Hamlet.

Shakespeare’s mistaken identity stories always require a certain amount of suspension of disbelief, and this one more so than most. No one asks fairly obvious questions—including the most obvious. The Syracuse twins are looking for their brothers, yet it never occurs to them that if people seem to know them, maybe they know their brothers. But, you know, that would rather spoil the story!

It is a funny story, though I don’t anticipate it becoming a new favorite. About a week after reading this, I went to find a filmed version (because sometimes comedy is harder to appreciate while reading a play, especially slapstick).  The only one I could get my hands on was the BBC’s 1983 version, which was…entertaining, but not wildly funnier than reading it.  They cast one actor to play both Antipholuses and one for both Dromios, which made things slightly more plausible though harder to follow…but not as hard as I expected!  The big take-away was that Shakespeare (or maybe the director, if there was judicious editing) was on this.  Every time any twin comes onstage, within a line or two of dialogue it’s clear which one he is.  Well-played there.  But I mostly just as well off reading as watching this one.

On that note, now’s probably a good time (though it will likely come up again as I read more plays) to sing the praises of the Folger’s Shakespeare Library. Almost every play I own is that edition, and it’s excellent. Every scene has a brief summary to clarify what’s going on, the footnotes are abundant and helpful, and they’re on the facing page, instead of the bottom of the page. I’m not sure why, but I find it much easier to keep my place when I have to glance to the left instead of jumping down to the bottom of the page. So, if you’re getting a copy of a play—look for Folger’s.

I read this all in one sitting (only 80 pages, not counting footnotes), and it was a fun way to spend a couple hours. My Shakespeare ear was apparently still in practice…although I also suspect this is not one of his denser plays! I’m happy to check another one off, and also to actually know what I’m talking about when I describe something as a perfect comedy of errors…which I do sometimes, most memorably the time I was trying to get to The Globe Theatre to see The Taming of the Shrew…but that’s another story!

And keeping score for the Bardathon…

Buy it here: The Comedy of Errors (Folger Shakespeare Library)