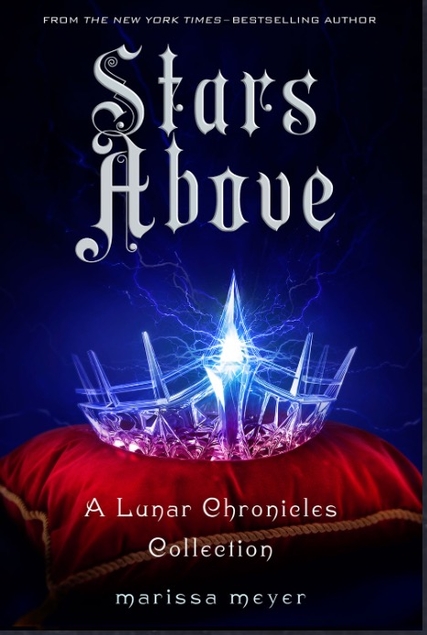 Finishing the wonderful Lunar Chronicles Quartet late last year could have been very sad…but happily, I already had the short story collection to look forward to!  Stars Above by Marissa Meyer came out early in February, with nine short stories letting us revisit Meyer’s delightful characters.

This was very much a supplement to the novels (Cinder, Scarlet, Cress and Winter), and I think only really works if you already know and love these characters.  But from that perspective–it’s a lot of fun, especially the last several stories.

The first six stories are all set in the childhood of one of the major characters from the series: Scarlet, Cinder, Wolf, Thorne, Cress and Winter (with Jacin).  These are all well-done, and individually each is a great story.  All together, they started to feel a little repetitive to me.  Each character and his/her circumstances are totally different, but they all have that common theme of “formative years of a major character.”  And most of them expanded on anecdotes already discussed in the main series, so I didn’t feel like they actually added a whole lot.

My favorites of the group are “Glitches” about Cinder, and “The Princess and the Guard” about Winter and Jacin.  This is a little surprising, since Cinder isn’t one of my favorite characters, but these are the two stories that did the most to really fill in backstory and give me something new.  “Glitches” is about when Cinder first joined her adoptive family, and fills in the early part of the Cinderella story.  We see how the roles and relationships within her family are set–and we see her meet the wonderful Iko.  “The Princess and the Guard” recounts Winter’s entire childhood, from seven to fourteen (or thereabouts), and gave me new dimensions to her character and especially her relationship with Jacin–and both she and that relationship are amazing.

The last three stories break the earlier theme, and are all really excellent.  When I started “The Little Android,” I assumed (because of the earlier ones) that it was Iko’s “childhood.”  It’s not…but it’s about another android who isn’t quite like her peers, and it retells another fairy tale in Meyer’s brilliant fashion.

“The Mechanic” recounts Kai and Cinder’s first meeting, but this time from Kai’s point of view–and I so wish it had been in the book!  Probably my biggest gripe about (the wonderful) Cinder is that I didn’t quite know what Kai saw in Cinder.  I don’t mean that I didn’t know she’s awesome, but I literally didn’t know exactly what he saw to think she was awesome.  And here it all is in this short story.  That, and a few dropped notes about his childhood, possibly make me like Kai better than anything that was in the primary series.

“Something Old, Something New” is the story I was most looking forward to, the unofficial epilogue to the series.  I didn’t get the sweet romantic resolution for Winter and Jacin that I felt was a little lacking in Winter, but I did get a whole lot of adorableness with Cinder and Kai (fresh off deciding I liked him better too) and some fun with Iko and possibly the loveliest wedding vows ever for Scarlet and Wolf.  And there was plenty of reassurance that all the wonderful characters of this series were getting their happily-ever-afters.

If you like this series, I highly recommend Stars Above.  It put a nice punctuation on one of the best series I’ve found in recent years…and now I get to look forward to Meyer’s Wonderland retelling!

Other reviews:
Mary Had a Little Book Blog
The Book Wars
Under the Covers
And many more…  Yours?

Buy it here: Stars Above: A Lunar Chronicles Collection