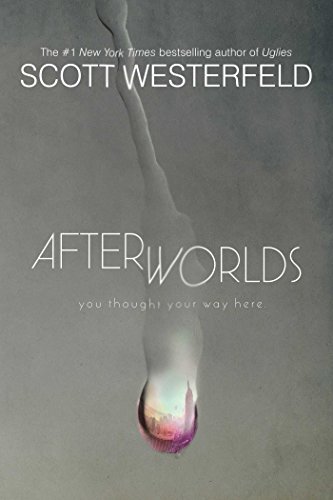 I want to start this review by saying how much I respect Scott Westerfeld as an author, due to his Uglies quartet.  That respect is why I kept reading his Afterworlds.  I still respect him…but Afterworlds was very disappointing.

The premise seemed appealing, two alternating storylines.  One is about Darcy, a new author, alternating each chapter with Darcy’s novel.  Cool idea!  However…

The book irritated me right out of the gate.  Darcy Patel is eighteen and wrote her entire novel during NaNoWriMo (not identified by name, but she wrote it all during November, so…), with no clarity on whether she’d written anything previously.  With minimal or no revisions, she promptly got an agent, sold her book to a publisher for a three-hundred thousand dollar advancement and a two book contract.  Which just does not happen.  Okay, maybe it does, but it’s about as likely as winning the lottery.  And the only author I’ve ever heard of it being that easy for was Edgar Rice Burroughs, ’round about 1910.

It doesn’t get better on that front.  Darcy moves to New York (because, of course), gets an apartment on her own in Manhattan and is adored by all the other writers.  She also gets an immediate new best friend who promptly and with no effort or angst from Darcy morphs into an awesome and incredibly understanding girlfriend.  And we are right smack in one of my pet peeves, the Too Beloved Heroine.  Because…really?

One of the best things in Darcy’s plotline, honestly, was when one of Darcy’s friends describes something as “nervous-making,” slang from the Uglies series that has crept into my brain.  Seeing it in a Westerfeld book made me happy.  Not a whole lot else in here did.

While everyone tells Darcy how wonderful her book is, I’m actually reading it in alternate chapters and…it’s just not that good.  Lizzie survives a terrorist attack and, in the midst of this near-death experience, accesses the underworld and meets Yamaraj, a sort of Hindu death god but not.  Ish.  We then fall smack into another pet peeve, Instaromance!  Because despite being midway through a terrorist attack and a near-death experience, Lizzie manages to describe Yamaraj as “beautiful” three times (that exact word) in his first five pages.  And it all just sort of goes from there.

I kept reading because I was really, really hoping that Westerfeld was going to pull a twist.  The potential was there.  Lizzie’s world could have started bleeding into Darcy’s, a la Stranger than Fiction.  Lizzie’s world could have started changing as Darcy revised, or could have become more self-aware as a fictional universe, a la Redshirts.  Darcy’s perfect New York life could have collapsed around her ears–which there were hints of!  But none of those things ever happened.  Darcy life hits some rough patches in the last hundred pages, but is pretty much back on track by the end.

That brings us right to the big problem with Darcy’s plot line (I mean, other than everything above…) which is that there’s no conflict in it.  There are opportunities, but nothing turns into anything serious.  She has some (fully justified) Impostor Syndrome, but not to the extent that it becomes a plot point.  Problems with her girlfriend, Imogen, are smoothed right away, generally by Imogen.  Her budget is sort of a problem, but there are zero consequences for her overspending.  Coming out as a lesbian to her parents creates nary a ripple.  The funny thing is, I like some pretty low-conflict books…but this was ridiculous.

Possibly more ridiculous is that Darcy goes on an author visit to a school, where she tells the students how important conflict is for a story.  I…don’t know how Westerfeld didn’t see that.  That author visit also featured the appalling writing advice from Darcy, “People say a lot of stuff about books, and writing, and literature, most of which sounds really complicated.  But in a weird way, it’s very simple.  You just type a little bit each day, and you get better and better at telling stories.”

I think what she meant was what Neil Gaiman said, in the brilliant quote, “This is how you do it: you sit down at the keyboard and you put one word after another until it’s done. It’s that easy, and that hard.” But she kind of missed something crucial in there.

So much for the problems with Darcy.  As to the problems in the book she wrote, that one had plenty of conflict, but the plot felt aimless.  It took me too long to realize that what seemed like a sideplot was actually the main plot.  Lizzie is turning into a pyschopomp (it’s a word)/reaper/valkyrie/thing, but the mythology never gets properly established to make me feel like I really grasped the magic system or world building.  Lizzie, meanwhile, has a serious and notable lack of existential crises around all of this.  I mean…survived a terrorist attack, is now seeing ghosts, knows what happens after death, is morphing into a possibly immortal, semi-mythological being…I don’t even know which part should freak her out first, but none of them do.

I already remarked on the Instaromance.  It never gets any better.  Yamaraj is described as “beautiful” seven times.  And Lizzie does a remarkable lack of freaking out even on the subject of how exactly to date an undead death god, or why said-undead death god would want to date her.

Darcy (in her plotline) spends a lot of time near the end of the book trying to rewrite her ending (of her novel), which is kinda unfortunate because I had problems there too.  On the subject of not freaking out, Lizzie makes some choices that she then sweeps completely under the rug.  Spoilers, but…does it matter at this point?  Lizzie decides to kill a very bad man.  It’s premeditated, it’s deliberate, it’s definitely murder, regardless of the questionable justice of the situation.  Also, she cuts up his soul, but, you know, murder makes things pretty serious anyway.  There’s no existential crisis after that either, and Lizzie appears to view the biggest negative in the situation as the fact that her death god boyfriend breaks up with her about it.  In fact, she describes the murder as “one mistake.”  Which is just…really rather disturbing.

So now that I’ve been thoroughly scathing about this book…I do still respect Westerfeld.  I’m not sure what happened here, but I think he’s a very good writer.  Oddly, in part because this may be the first book I’ve ever totally disliked, but still written down three quotes from.  All of them were about writing, and so much better than that nonsense about typing up above.  So maybe I’ll just end on that…

“Being fathomed was even better than being flattered.”

“Whenever she began to type a story, Darcy felt an alternate universe inside her computer taking form.  Some parts of it intersected with her own world, but other parts were made up.  Those connections with reality gave stories their powers, and when that realness began to fray and splinter, something broke inside Darcy as well.”

“You know how it hurts when characters die?  That’s because characters are real.  Because stories are real, even if they’re fiction.”

Other reviews:
Cuddlebuggery
Escape from Reality
Lily’s Book Blog
Anyone else?