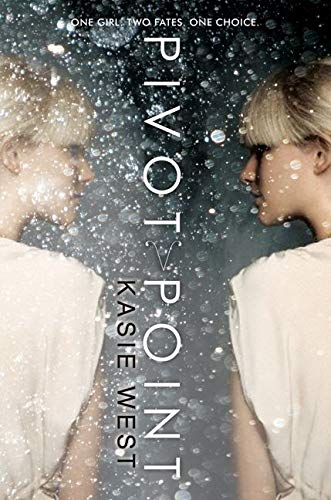 One of my reading goals for the year is to read more books involving parallel universes. I don’t mean books set entirely in an alternate Earth, but ones that actually deal in some way with multiple universes, or multiple paths someone’s life could take. I kicked off with one that explored exactly that second option: Pivot Point by Kasie West.

Seventeen-year-old Addison lives in a secret community where everyone has heightened mental abilities—one special, registered Talent, like telekinesis, mood-enhancement, or lie-detection. Addie’s best friend Leila can erase people’s memories. Addie has a rare form of clairvoyance: when she’s faced with a choice, she can perform a Search, to see how her life would turn out (for a chosen length of time) if she makes each choice. At the beginning of the book, she’s faced with the news that her parents are divorcing; almost as shocking, her father plans to leave the secret community to live among the Normals. Addie must choose which parent to live with, and performs a Search to see what her life would be like for the next month if she makes each choice. The bulk of the book is alternating chapters as Addie lives out each path—until she has to choose which one to make real.

I loved the parallel-lives-ness of this book. It was so fun to see events play out in different ways because of Addie’s choice, especially when the two paths overlap. Other people are still doing the same things on the edges of Addie’s life, so the larger world follows the same trajectory, but Addie’s position in events changes…and so, some key things turn out differently.

Although I was mainly into this for the two-paths aspect of things, each path was pretty interesting in its own right: life in a high school for kids with special abilities, or one of those kids trying to adjust to the normal world. Technology is far more advanced in the special community, and they know the secret true history of the world, so even basic things (like remembering which doors open automatically and which don’t, or the Normal explanation for the start of World War I) prove challenging for Addie. And over in the special community, we find out about football at a school where all the players have Telekinesis.

Of course Addie meets a boy in the Normal world—which did earn a bit of an eye roll from me because, I mean…of course. It’s like a rule of YA novels, if the protagonist is attending a new high school. But it was a pretty good YA romance anyway. Addie and her love interest, Trevor, get some good banter going and are fun together. Meanwhile in the secret community, Addie’s dating someone else…which fortunately has enough of a sinister vibe that this doesn’t turn into a book about choosing between two guys.

The book grows more suspenseful as it progresses, and as it becomes increasingly clear that something really horrible is going to happen in either (or both) of Addie’s paths. And we got some nice twists, some I guessed and at least one I didn’t anticipate.

If the book falters anywhere it’s when we finally leave Addie’s Search and she has to make a choice. Events unfolded in such a way that there’s really only one (albeit painful) choice she can make. Which in itself is slightly disappointing, and I was also disappointed by how quickly (albeit painfully!) Addie reaches a decision. I think I would have liked her forced to make a little more of a gamble.

However, it was still a very cool concept that was for the most part well-executed. And I’m looking forward to reading the sequel!

Other reviews:
Good Books and Good Wine
The Perpetual Page-Turner
Writer of Wrongs
Anyone else?