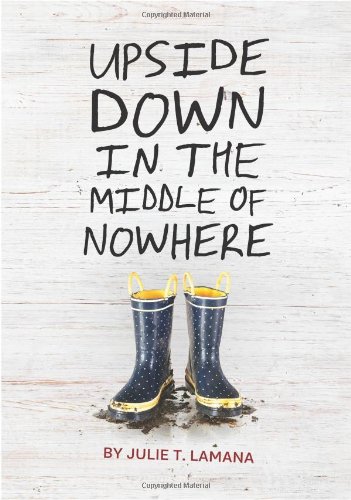 The premise of Upside Down in the Middle of Nowhere by Julie T. Lamana had me intrigued, mostly as an opportunity to read about events that are now history, but recent enough that I remember them.  I’m still young enough that I haven’t encountered that many books like that!  This one centers around Hurricane Katrina in New Orleans—and since it’s about an African-American family in the Ninth Ward, it also fits my diversity challenge.

When the story begins, Armani’s major concern is that these obviously over-blown storm warnings not disrupt her tenth birthday.  The party comes off, but when Katrina arrives that night, suddenly Armani and her family have life-and-death concerns—and I mean that tragically literally.  Armani becomes a refugee in her own city, with responsibilities no ten year old should be shouldering.

This was an excellent book—and it was terrifying on several levels. Which is part of its excellence.  Armani is a great character, who thinks she’s so much older than she is—as one does, at ten!  Her family is very loving and supportive; she has three younger siblings and a brother close to her in age.  She also has very involved parents, a beloved grandmother and an entire network of extended relations.  All of those connections make it even worse when the world fractures apart—because there’s so much stability to disrupt, and so many people to be in danger.

The book is terrifying on an immediate level, as Armani and her family are in serious danger, first from the storm and then, even more, in the aftermath of the flood as all services and normal functioning of society break down.

But it was also terrifying (or at least, kind of disturbing) how foreign Armani’s world felt to me before Katrina hit.  There was just a flavor to the society, to the interactions, to the attitudes, that felt foreign—and felt more like the Civil Rights era than a mere ten years ago.  I use that description of the time period deliberately because I don’t know if it’s a sign that the neighborhood is in some ways trapped in the past, in terms of technology and education levels and opportunities, or if it’s because that’s my only experience reading about black neighborhoods.  It’s always Civil Rights era stories, not today (or ten years ago).

And it was definitely terrifying how completely things fall apart when the storm hits.  I think there’s an attitude in the West (maybe it’s just me?) that true disasters can’t happen here.  We have bank accounts and cars and infrastructure!  I think the lesson of Katrina, vividly painted here, is that we’re really just one natural disaster away from the developing world.  The aftermath of the storm reads like something more often seen in poverty-stricken parts of Africa.  And sure, the infrastructure does kick in, and rescue teams arrive, and people are doing things towards recovery…but they couldn’t stop the disaster from happening, or make the immediate aftermath okay.

There are real costs and real tragedies here, and though the story ends relatively soon after the storm, the reader can extrapolate other costs in the future.  Despite all that, the book does end on a hopeful note, and there are lights in the tragedies too.  I recommend this one highly—but it is a tough one on several levels!

Other reviews:
Slatebreakers
Nerdy Book Club
Semicolon Blog
Anyone else?

Buy it here: Upside Down in the Middle of Nowhere

One thought on “Book Review: Upside Down in the Middle of Nowhere”