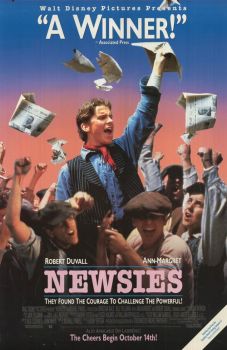 I recently went to see the play version of Newsies, the Broadway musical on tour—which led me to rewatch the old Disney movie.  I had a bit of a Newsies phase five years ago, but haven’t watched it in a few years.  It was so much fun to go back!

Based on true events (though there was presumably less singing), Newsies recounts a newsboys strike in New York in 1899.  In the fictional version, the boys rally around Cowboy Jack Kelly, the front man while his friend David, better educated than most, has the ideas about social justice and unions.  The boys stand up against the might of Joseph Pulitzer, publisher of The New York World and arguably the most powerful man in New York at the time, to demand fair treatment in their work.

At its heart, this is a story about the unseen demanding to be seen.  As one of the songs puts it, “the world will know that we’ve been here.”  I love that, because it’s coming from a group of boys who don’t get noticed, who scrape along and never get heard.  I love the theme of the unheard standing up for themselves, and I especially love it when it’s expressed in really great rally-the-troops songs.  Even better when they leap around in dance numbers too. 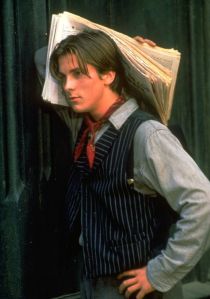 And the other heart of the story, for me, is Jack Kelly, played by a very young Christian Bale, who dreams of going out west for more opportunity.  My favorite song is “Santa Fe,” when tough guy Jack is alone and letting down his guard, knowing exactly how rough and hopeless his life is, and dreaming of something better.

“Santa Fe” is almost too good a song, because it gives me issues with the ending…but that would be spoilers!  If you know the story, I’ll just say that I fully believe there’s one more final chapter to this story that didn’t get filmed.

On some level, Newsies has things in common with Les Miserables (on a much lighter scale!), at least with the revolution plotline…only the entire story is about Gavroche, who’s been multiplied a few dozen times.  It shouldn’t be surprising I love this movie, considering Gavroche is one my favorites in Les Mis.  And also…Newsies has a much happier ending!  Even though I think there should have been at least one more scene, I enjoy the ending anyway.  And it’s just a really good, make-you-smile movie all around.  Very recommended!

One thought on “Movie Review: Newsies”