I’ve been continuing along in my Newbery Medal reading, but I’m behind on reviewing…so today I thought I’d do a three-for-one of three very different books, connected only by that shiny gold stamp on their covers! 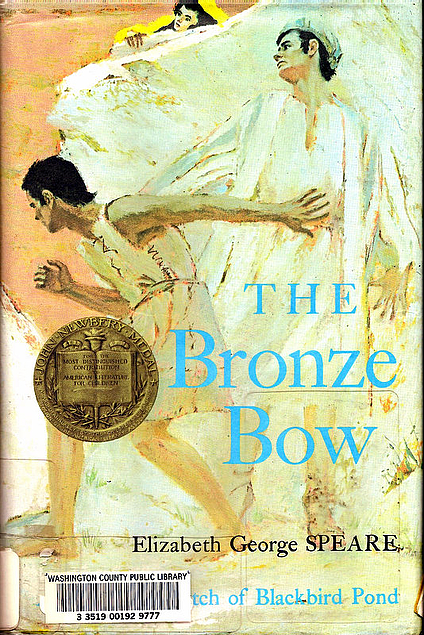 Set in first-century Galilee, Jewish Daniel is acutely aware of his people’s oppression by the Romans.  He is driven by rage and the desire to avenge his father’s death at the hands of the Romans; he believes the way to achieve it is with a group of Zealots hiding in the mountains.  His path turns when he has to assume responsibility for his sister Leah, so frightened as a child by Roman attacks that she can’t leave the house or meet strangers.  Daniel chafes at being held back by Leah—but is also beginning to wonder if this new preacher in Capernaum, Jesus of Nazareth, might be the answer to Roman oppression after all.

This book intrigued me with the promise of a story set in first century Galilee that wasn’t the Nativity, Passion or ministry of Jesus.  Not that there aren’t a lot of good stories centered around those—but there are a lot of them.  And when Jesus entered into this story after all, I was fascinated to see him from an outside perspective.  Daniel isn’t an apostle, or even an ongoing follower.  He’s just one of the five thousand when loaves are multiplying, one of the people crowding the beach to hear the preacher.

I liked the insights into what it would have been to be an ordinary person encountering Jesus.  In the Bible, everything always seems fairly clear-cut and obvious (though the Apostles rarely understand things anyway).  From Daniel’s perspective, following Jesus is much more like seeking out wisdom or the right path in our own day.  Maybe this teacher has good insights—but maybe that one does too, and are we really sure that this turn the other cheek thing makes sense?

Jesus is not actually the primary plot thread of the book, which centers around Daniel’s struggles, his sister, his friends, and his desire to find his life’s purpose.  All of that was engaging too, but I was especially struck by the Jesus subplot—precisely because it was a subplot!

Buy it here: The Bronze Bow 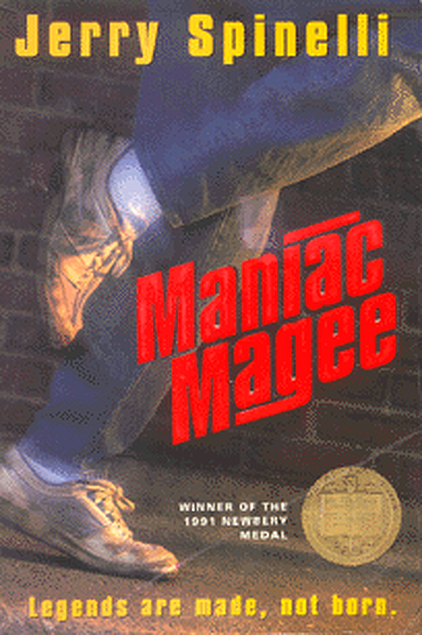 I picked this one up because it’s Jerry Spinelli, who wrote a lot of good things but mostly I like The Library Card.  In a very different setting from The Bronze Bow, Maniac Magee is a modern (or close to it) story set in a small city on the U.S. east coast.  I say “small city” because it’s big enough to have a white neighborhood and a black neighborhood, but neither one seems to be very large.  The book isn’t called the Legend of Maniac Magee but it certainly could be, telling the legendary, almost Paul Bunyan-like tale of Maniac Magee who can hit any baseball, untie any knot, and run like nobody’s business.  He hits town looking for a place to belong, and in the process spreads his legend and moves across racial lines too.

This book takes an interesting arc, gradually growing more serious and heavier on the issues.  It starts out like one of a dozen boy stories, in a world recognizable from The Sand-Lot or The Left-Handed Shortstop.  But Maniac is a white kid living in a black neighborhood, and not everybody likes that.  The racial tension theme weaves through the rest of the book, though the plot also takes a detour as Maniac meets an old baseball player who never quite made pro, and learns about lost dreams.

The story goes into some sad and difficult places, and while it has a positive ending, it doesn’t go for easy answers, neat resolutions, and perfect solutions.  And I like that—although it gets very sad in a few places along the way.  Pretty remarkable that it all fits together in a book that also involves a scene of scoring a homerun by bunting a live frog! 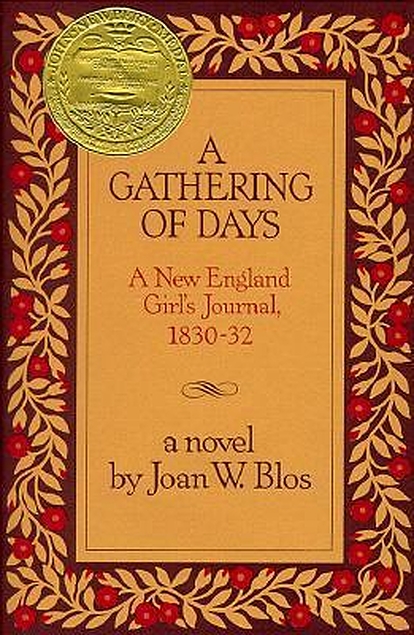 Again, an entirely different book than the previous two!  This book is presented as the journal of Catherine Hall, detailing her life in a small town with her widower father, young sister, and neighbor friends.  Though there is some excitement and tragedies, involving a runaway slave and a friend lost to illness, mostly her life is a quiet one, more about what life was like in the time than it is about a plotline with Catherine at the center.

Journal-style books are hard.  Either they provide such a level of detail that no one could really be writing them (Tamora Pierce’s Beka Cooper series comes to mind, much as I otherwise like it), or they’re realistic in detail and consequently so distant that I can’t get into the story.  This one errs on the side of distant.  It has moments that drew me in, and I liked Catherine herself well enough, but I didn’t ever love the book.

But then, every journal-style historical fiction book can’t be Catherine, Called Birdy by Karen Cushman…which I would have sworn was a Newbery Medal winner too, but it’s actually a Newbery Honor/runner-up for the Medal.  Robbed!  Though Cushman won the following year for The Midwife’s Apprentice, so that’s something!

Buy it here: A Gathering of Days

3 thoughts on “A Newbery Three-fer”