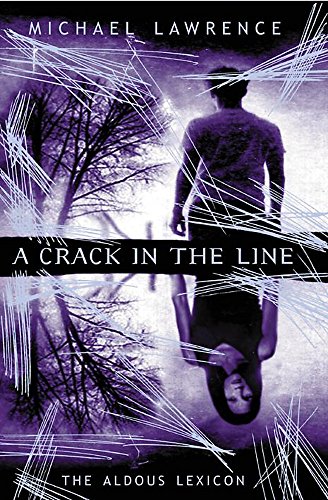 I’m carrying on my parallel universe reading with A Crack in the Line by Michael Lawrence, featuring one of the more unusual alternate life scenarios.

Sixteen-year-old Alaric lost his mother two years earlier in a train accident, following surgery where she had a 50-50 chance of survival.  One day he slips into an alternate version of his house…but in this life his mother survived.  But something else also changed earlier: Alaric meets an alternate version of himself.  Naia is as close to being Alaric as possible–except she’s a girl.  Alaric and Naia begin to explore the differences between their lives, how the parallel worlds work, and mysteries in their family’s past.

This read was a mixed experience.  I liked the concept a lot, and in some places the emotional impact was very well done.  I didn’t mean to read two parallel universe books involving grief in a row; that just kind of happened.  Alaric’s grief over his mother, and the extremely complicated feelings of knowing she’s alive in another universe were well-explored.

I liked the parallel universe mechanics here.  This follows the basic idea of shifts in the key events in the past causing a different present/future.  A lot of versions of that emphasize choice, but this one emphasized even odds.  There’s at least one example where a conscious choice changed things, but the main things (the mother’s survival, Alaric/Naia’s gender) wasn’t really under anyone’s control.  It was just a case of even odds, so universes formed where each option happened.  (It does open the question of whether universes exist for every individual to be gender-swapped…but that’s a bit much to encompass.)  I also liked that it explored multiple changes, instead of just one.  There are at least three key differences between Alaric’s and Naia’s universes, so different results kept happening at different times.

I liked the idea of two parallel people with a gender-swap angle (mostly; more on that later).  Alaric and Naia have a strange and intriguing connection.  This book gets described occasionally as “a suspenseful thriller” which I’d say is taking it a bit far, but it was engaging and the mysteries were good–but largely unresolved.  I didn’t realize until I finished this that it’s the first book in a trilogy, so a lot is left unanswered.

Now I’m debating whether to read the next one, because of some of those mixed feelings.  Mainly, this book got my feminist hackles up.  It was in a far more subtle way than others I could name, but it still had some issues.  A huge focus of the book is Alaric and Naia’s home, an old Victorian built by their ancestors called Withern Rise.  It’s a very cool house and there’s cool history around it.  But.

As they (mostly Alaric) go back and forth between worlds and see the differences in their lives depending on whether their mother survived, the most emphasized one is how well the house is maintained.  It’s not that there aren’t other differences mentioned–but there’s a lot of emphasis on how much cleaner Naia’s version is, because her mother survived.  Because apparently cleaning the house is the key impact her mother is having.  That might be over-emphasizing it–but the book emphasizes that particular impact.

I might give this more of a pass, except for two other things.  Alaric mostly is the one who travels between worlds, even though they both have the ability and knowledge to do it.  And during significant portions, Naia hangs around waiting for Alaric to (possibly) turn up, even though I couldn’t see any reason at all that she couldn’t go to him.  So–same person, but the female version is more passive, with less agency?  And one of the few times she does go to Alaric’s world, she decides a nice thing she could do for him would be to (can you guess?) clean up his house.  Because the girl cares about cleaning.

Don’t get me wrong, it totally makes sense that the grieving version (Alaric) cares a lot less about taking care of the house than the non-griever (Naia).  But when you put all the relatively subtle or could-be-explained-otherwise pieces together…I don’t like the pattern.

But I did like the mysteries that were raised, and there was a late-in-the-book twist that opens up some intriguing new territory.  And maybe that pattern I don’t like would get better in a larger context?  So I’ll probably try at least the second book in this, but it does have something to prove to me before I go on to the third!

Buy it here: A Crack in the Line