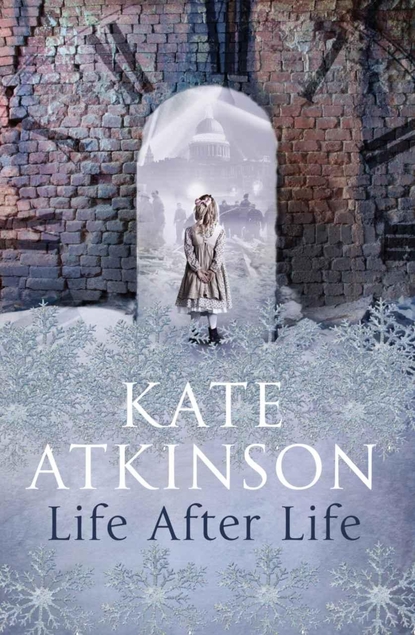 I just finished another parallel universe book, and…am not quite sure how I feel about it!  Life After Life by Kate Atkinson was strikingly different from my previous reads in this area–striking mostly because it seems like it should be exactly the same!

This may sound remarkably like another recent read, The First Fifteen Lives of Harry August.  It is–and isn’t.  Ursula does retain some memory of her previous lifetimes, but unlike Harry’s total recall, her memories (mostly) exist only in the form of deja vu and sudden premonitions.  Sometimes they help her avoid a disaster or make a better choice, but she doesn’t have Harry’s full awareness of what’s happening.

So why do I feel mixed about this one?  This is one of those odd duck books that I genuinely enjoyed reading, while being very clearly aware of a lot I actually didn’t like about it.  Let’s unpack that.

The first section of the book reads, mostly, like a fairly light, early century pastoral.  Ursula’s childhood, barring sudden deaths, is pretty comfortable on the whole, in a country house with several siblings and an imperfect but caring mother.  The book bogs down a bit in 1918, when Ursula takes several lives to stop dying of the post WWI influenza epidemic.

We finally get past 1918, only to have the book take a sudden, untelegraphed turn to a darker tone when Ursula is raped at 16.  That lifetime pretty thoroughly descends into horribleness and never comes out again.  Although–the most satisfying moment of the whole book is in the next lifetime, when Ursula punches her would-be rapist in the face the first time he tries to kiss her, resulting in a completely different path.

The book’s tone still remains darker in many ways though, on until we get bogged down again in World War II.  This starts interesting but lasted too long for me.  We do see Ursula live strikingly different lives, including a life spent in Germany as a friend to Eva Braun, and a life as a rescue worker in London during the Blitz (warning: horribly violent with disturbing descriptions).

But although I didn’t expect some of the darkness and the Blitz seemed to last forever, the book was interesting.  There were some clever parallels, and non-parallels, as Ursula’s lives go different ways, intersect or meander off another path again.

So the challenges.  The mechanism of the multiverse was never clear to me.  Harry August makes clear that the only changes from one life to the next will be caused by the people who remember past lives and so can make new choices.  Ursula is the only person we know to be remembering past lives; some changes are because of her, but others are unmistakably independent of her, with no explanation for how they can be happening.  There is a tantalizing, fascinating hint in the last few pages that she may not be alone in her remembering…but that’s never explored, and doesn’t entirely hold together either.

With regards to the unexplored, the book opens with a prologue that doesn’t come into play until the end–but since it’s there at the beginning, it’s not a spoiler to say that Ursula eventually reaches a life where she decides to prevent World War II by killing Hitler (of course!) before he achieves power.  Fascinating–what would a world without World War II look like?  How would that play out for Ursula and the rest of the world?  No idea–Ursula dies in the assassination, we don’t get to see any consequences.  Such a lost opportunity!

Despite issues, this is masterfully woven together.  The fabric grows increasingly complex with each repeated life.  We gradually come to know not just Ursula but her whole family better and better, not just by one lifetime’s choices but as they each go down different paths.  Ursula’s lives also have increasing effect on each other as the book goes on; while the first half feels more like a choose your own adventure book with entirely independent paths, later lives have a greater sense of cumulative experience, lessons learned and new paths attempted, for better or ill.

So you see, I’m kind of mixed here.  For me, this was a good book that probably could have been better, and that went a little dark for my taste in places.  I’d give a significant edge to Harry August if I had to choose, but this was a good read too.  And I remain amazed that I have now read three books (because Replay by Ken Grimwood fits too) about someone living the same life again and again with memories of previous passes through, and yet all three have been utterly different from each other.  There may be no new ideas–but the possibilities of what you do with them are infinite.

Buy it here: Life After Life

One thought on “Book Review: Life After Life”