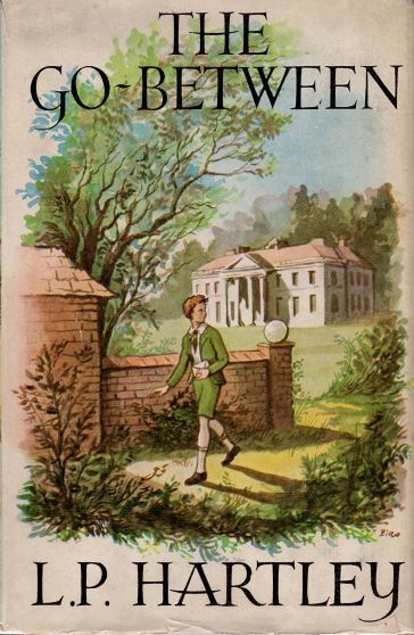 This is one of those charming, terribly British books that manages to be incredibly discreet, while centering the entire plot around a scandal.  Marion and Tom are of course carrying on a torrid affair, despite the class difference, despite Marion’s coming engagement–but even though the affair is at the center of everything, I don’t think Hartley ever once says so!  But I like that–because we all know what’s going on, but Hartley is subtle and clever about conveying it.  And it also is a good mirror for Leo himself, who is (somewhat out of his own desire) in the dark for most of the book.

Perhaps in part because of the subtlety, there’s a lot ambiguous in the book too.  Do Marion and Tom love each other, or is it just a fling?  How much is Marion using Leo?  And what does the older Leo conclude when he finally looks back on this portion of his life?

That last question was a big reason I read the book, actually.  The play ended with a dramatic and (I think) tragic song from Crawford, as Leo concludes that, though he may have wasted the last fifty years of his life, afraid to take action ever again, his life’s purpose was fulfilled by playing a role in Marion’s love story with Tom.  And…well, if you ask me, the woman was a manipulative witch, he had a chance to finally, fifty years later, see through her, and he willfully put a blindfold back on.  But it was all ambiguous about whether the audience was meant to accept Leo’s view, or come out thinking the way I did.

Spoiler, but kind of not: the book is even more ambiguous than the play.  The ending is actually less emotional for Leo, leading to fewer conclusions by him or the reader.  Though that makes me wonder a bit…how much of the play’s ending was influenced by the casting of the leading man?  It’s a pattern in Crawford’s CDs to make songs significantly more dramatic and emotional than their original versions, so…clearly this is his forte!

As long as we’re there, just a few words on Crawford.  His singing was as wonderful in person as I hoped it would be, and he was marvelous in this role.  Because older Leo is remembering everything that happens in the play, Crawford was onstage literally the entire time, watching and sometimes interacting with the events playing out.  My respect for Crawford as an actor (already high) only grew–I always knew he put incredible emotion into his singing, but I swear he had actual tears in his eyes at one point in the play (because of course I got a seat close enough to see that!)  There is, alas, no soundtrack or DVD of the play available, though you can hear his major solo on YouTube (with a few awkward stills, so maybe just listen…)

So part of the charm of the book for me was that it brought me back to the Apollo Theatre, watching Michael Crawford perform–but even without that incentive, if you like discreet British novels of the early 20th century, I liked this one.  It has that good opening line too…even though, oddly enough, the line has very little to do with the paragraph or the book that follows it!

Buy it here: The Go-Between

2 thoughts on “Book Review: The Go-Between”