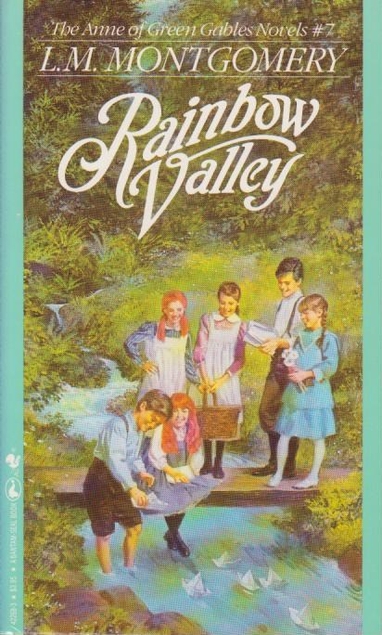 I’m continuing my way through a reread of the Anne of Green Gables series, and continue to have more thoughts.  This time I’m thinking about Book 7, Rainbow Valley.  Rather like certain Oz books, this is the Anne book that isn’t an Anne book.  But it’s very much a Montgomery book, with certain of her attitudes on full display.

By the time Montgomery wrote Rainbow Valley, I really don’t think she wanted to write about the Blythes anymore.  This was her fifth book (4 and 6 were written later), and because she wrote it before Anne of Ingleside, it was the first with Anne and Gilbert’s children.  With the partial exception of Walter, Montgomery doesn’t seem very interested in the Blythe children.  She gave Anne a happy ending, Anne’s children grow up in the midst of said-happy ending, and Montgomery was not yet at a point in her life when taking refuge in that happy ending was welcome to her (as in Anne of Ingleside).

So she did what other authors have done–billed the book as next in a popular series, then proceeded to write an almost original novel.  We get about two chapters of Anne and her family, then the focus shifts irrevocably to elsewhere in the neighborhood, to tell the story of the less fortunate and more interesting (to Montgomery, and by narrative convention) Meredith family.  I have to admit, the bait and switch has taken me many reads to get over.  I think this is the first time I’ve managed to really accept that this is not and was never going to be a Blythe novel, rather than feeling that we somehow got cheated out of the story that was meant to be here in the series.  And you know, after getting past that, this is a good novel!

So much for contextual set-up, perhaps a bit on the plot?  Reverend John Meredith is a widower with four children: Jerry, Faith, Una and Carl.  He is a wonderful preacher and highly educated but much more focused on theology than child-rearing.  The children are basically good-hearted, but get into a series of scrapes and embarrassing predicaments, perpetually scandalizing their oblivious father’s congregation.  In between crises, they play in Rainbow Valley with the Blythe children, who have small supporting roles.

I like the Meredith children, and in many ways they’re better developed characters than the Blythes.  (Nan and Di are basically interchangable, Shirley is distinguished only as Susan’s favorite, and Rilla is at this point still the baby of the family and not very individual therein.)  Jem Blythe and Jerry Meredith are very much of a type (sturdy oldest brother, basically) but Carl is fun with his fascination for bugs and crawly things of all sorts.  Faith and Una are the primary characters though.  Faith is lively, self-confident and brave, while Una is sweet and shy.  Both are perhaps best portrayed by scenes when each goes (separately) to speak to a strange adult in an effort to aid their father.  Both are extremely courageous, while handling the parallel situations in utterly different ways.

Another major figure in the book is Mary Vance.  If the Merediths are more interesting than the Blythes by dint of having troubles, Mary is one level beyond the Merediths.  A runaway, the Merediths rescue her.  They have a somewhat civilizing influence on her, while she brings what was, for the time, street smarts, slang and scandalizing irreverence.  I wish I liked Mary more–she’s interesting, but she’s not very likable.  She tends to tell the Merediths terrible things for their own good, and I can’t get quite get past the arrogance and sharp tongue to actually like Mary for herself.  She’s interesting to read, though.

Mary also continues the trend of Anne’s House of Dreams (written directly before this one) of bringing in darker strains in supposedly light pastoral comedies.  Mary is the orphan daughter of two alcoholics, who ran away from a guardian who overworked and beat her.  That’s not quite how Montgomery puts it, but that’s what she’s describing.  Mary brings a darker underside of the world into the story.

Things are not great for the Merediths either.  Mr. Meredith may be a great minister, but he is a terrible father.  He doesn’t mistreat his children, but he ignores them.  He keeps an unfit housekeeper, and while the children don’t starve they eat bad meals and are frequently described as being hungry.  They go around in shabby clothing, and no adult figure pays the least attention to when (or if) they get home in the evening.

Besides providing an absolute minimum of physical care, Mr. Meredith doesn’t give any sign of providing any kind of moral, emotional or even educational support.  He sporadically gives wise lectures when some need for it is thrust in his face, but otherwise it’s hard to tell if he ever even talks to his children.

Mr. Meredith is a terrible father–but I don’t think Montgomery quite realizes it.  The Meredith children certainly don’t.  They notice their trials, but never, ever blame their father.  The congregation notices, but they have only one solution; obviously Mr. Meredith must remarry, so his new wife can raise the children.  The idea that he should do more is all but unthought of.

I know, it’s a book from 1919, and standards were different a hundred years ago.  Parental gender roles were much more proscribed, and an emotionally-involved father was foreign.  But I really think something beyond that is going on here too.

Mr. Meredith doesn’t even succeed at what would be more a father’s sphere–providing for his children materially and, as a wise minister, giving them moral guidance.  And I don’t think Montgomery sees the gap there, because her own father was so much absent.  I’ve touched on this before, of the way parents are portrayed in Montgomery’s novels seems influenced by her own parents.  Fathers tend to be absent, busy with more important matters than their children, and Mr. Meredith is an extreme case.

Montgomery’s own father was physically absent most of her life, leaving her to be raised by grandparents who she by times resented.  She never seemed to resent her father for leaving her, however, and maintained that they always had a close and loving relationship (albeit thousands of miles apart).  Mr. Meredith is physically present, but perpetually distracted by weighty theological matters–but that’s never his fault.  If he leaves his children with the housekeeper, it’s the housekeeper’s fault if she doesn’t take proper care of them.  A hypothetical second wife would be responsible for raising the children, but Mr. Meredith, never.  His role is purely to love them–in an abstract way, since he doesn’t seem to ever demonstrate it–and focus on his work.

As always, this is a light-hearted enough story and it all winds up with a happy ending (spoiler: it’s not Mr. Meredith suddenly realizing his responsibilities).  But I was fascinated by the portrayal of Mr. Meredith and his role as father.  I really think this (and other fathers in Montgomery novels) is an echo from an author who needed to idealize her father.  She had a specific experience with him, and her novels very much normalize distant fathers whose love for their children is somehow never in question no matter how absent (physically or mentally) they are.

This is why I keep reading these books.  They’re funny, light, whimsical adventures in an idyllic setting, yes–but they are also so rich in how they portray people and relationships, especially on a meta level.  L. M. Montgomery herself continues to be the most fascinating figure to me in her writing.

Other reviews:
Leaf’s Reviews
Hope Is the Word
A Library Hospital
Anyone else?