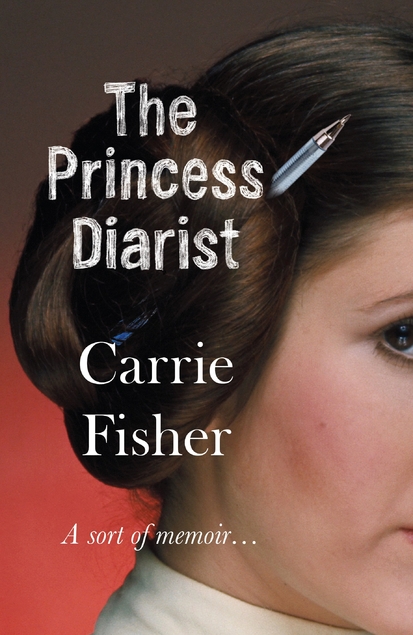 It sounded great–I’d been meaning to explore Carrie Fisher’s writing ever since her death (which still makes me sad), and this promised to be reminiscences of filming the first Star Wars movie, plus excerpts from her journals of the time.  Wonderful!  And it was, for about the first quarter.  She talks a little about her life growing up, her very early film career, and how she first was cast as Princess Leia.  I loved the anecdotes of the first time she read the script, and how Leia got her iconic hairstyle.

But then, as she says, she met him.  I vaguely heard some while ago that Fisher had recently revealed her long ago affair with Harrison Ford–and here I stumbled right into the book that must have done it.  A solid half of the book (albeit in the middle) is devoted to “Carrison,” 19 year old Carrie’s affair with the then-married, mid-thirties Harrison Ford during the filming of the first Star Wars.  It was a remarkably unsentimental affair, probably some form of friends with benefits except they didn’t even appear especially friendly, and whole passages are devoted to how little he talked.

To give Fisher credit, she’s an engaging writer, with a wonderful sense of humor and a very entertaining voice that managed to make this interesting for a lot longer than it otherwise might have been.  But it wasn’t enough, because the fact is–I don’t care about her affair with Harrison Ford.  The whole thing is kind of squicky (for all she handles it delicately and with class), and I’d really rather draw a big blazing red line between the actors’ love lives and the characters’ love lives (because Han and Leia–love them and their relationship).

I guess you know you’re a geek when a celebrity starts in on her scandalous love life and your reaction is–yeah, but tell me about Star Wars!!  Tell me more about Leia’s hair, and what was it like acting opposite Darth Vader, and how’d you pull off some of the stunts, and on and on.  She gets into that stuff a little–a very little, and mostly talks about Harrison.  And those journals?  Yeah.  Of the excerpts provided, it’s all adolescent relationship angst and poetry.

Once she finally gets past Carrison, they’ve already wrapped filming and she’s on to the aftermath.  The immediate aftermath was interesting, but I couldn’t muster much sympathy when she got to the convention circuit, especially when she starts describing being a has-been celebrity watching the new blood.  I mean–she was Princess Leia, that’s like being the Paul McCartney of the geek world.  You’re never not a star.  I can’t believe she was ever at a con where she wasn’t a (or the) headliner.

So–not at all what I wanted in this book.  But I did like Fisher’s writing, which makes me want to explore other things she’s written.  I know there’s several other books, so the trick will be to decide which one–since the obvious first choice was not quite what I hoped!  Any recommendations welcome. 🙂

Other reviews:
Hello Jenny Reviews
Laughing Place
FanGirl
Anyone else?

Buy it here: The Princess Diarist

2 thoughts on “Book Review: The Princess Diarist by Carrie Fisher”