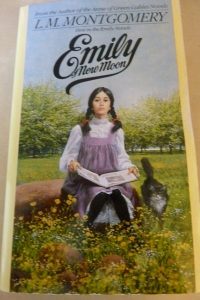 Having just finished rereading the Anne of Green Gables series, I’m about to reread L. M. Montgomery’s other most famous heroine’s trilogy, starting with Emily of New Moon.  I thought it would be fun to look back at what I had to say last time I reread!

It’s been far too long since I read Emily of New Moon by L. M. Montgomery–ten years, I think, since I took the trilogy with me on a school trip to England.  In fact, I found a customs form tucked into my book!

Emily is a lovely and beautiful tale of an imaginative girl who dreams of being a writer–of climbing the Alpine Path to success.  She lives with relatives at New Moon farm, and runs about with her devoted friends, Ilse, Teddy and Perry.

The book sounds at a glance like it’s an opposite number to Anne of Green Gables, and there are certainly overlaps–kind yet not quite understanding guardians, the beautiful expanses of nature in Prince Edward Island, the bosom friends, flights of imagination and inevitable scrapes.  But from the very beginning, when Emily learns in devastating fashion that her beloved father is dying, there’s a tragic strain here that gives a different color to the entire trilogy.

The difference is visually clear, looking at Emily’s midnight hair versus Anne’s fiery red locks, but it goes much deeper than that.  Emily seems to feel things more deeply than Anne (despite all her drama)–both joys and sorrows.

The book also touches (with extreme discretion, of course!) on more mature subjects.  There’s Mr. Carpenter, Emily’s irascible teacher, who drinks on weekends because he feels his life has been a failure.  And there’s Ilse’s mother, who gossip has it left her husband and baby to run off with a sea captain.  Anyone who thinks Montgomery only wrote gauzy fairy tales with no shadows is wrong.

However–don’t come to the conclusion that the book is dark or morbid or depressing!  It’s still Montgomery–and it’s still Prince Edward Island–and there’s still more beauty than sadness.  Emily has her trials and her sorrows but she is also surrounded by love and buoyed up by her dreams, her joy in the beauties of nature and her passion for writing.  And while it’s been some time, I don’t remember being strongly conscious of the darker undertones when I read this at a younger age.

It’s fascinating to read this after all my reading of Montgomery’s journal.  There are strong autobiographical strands, especially in Emily’s writing goals and experiences.  I get a fun little moment of recognition every time I spot something from her real life–like when Emily’s aunt describes her blank verse poem as “very blank” (LMM’s father said the same once) or when Emily mentions a compact with a friend to never say good-bye (LMM had such an agreement with her beloved cousin, Frede).

You know I’m always going to recommend Montgomery books.  🙂  Emily of New Moon is a beautiful novel with an appealing heroine–and for adult readers, more depth and maturity than you might expect.

Other reviews:
Reading the End
Books4Fun
Bookshelves of Doom
Anyone else?