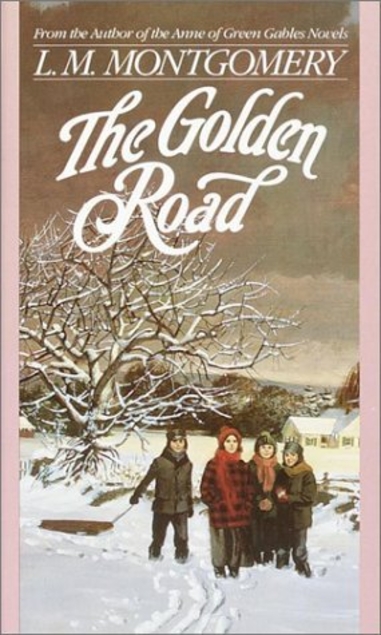 I never closed the loop on this one from the January L. M. Montgomery reading challenge.  I reviewed The Story Girl, then went on to reread its sequel, The Golden Road.  I was pleasantly surprised by how much I liked the first book…and then got more clarity of my earlier impressions by rereading the second book.

The sequel picks up much where the last book ended, and continues in the same style.  The children of the King family ramble around their family farm and orchard: Dan, Felicity and Cecily, hired boy Peter Craig, neighbor Sara Ray, Toronto cousins Beverly (a boy, despite the name–also the narrator) and Felix, and cousin The Story Girl, so nicknamed because of her telling of stories.

On a surface level this book matches the previous one, but once you scratch said-surface it isn’t really the same after all.  It’s still a lot of light-hearted stories about a group of children in Prince Edward Island, and the stories still centered around Montgomery staples like family gossip, school trials, the local colorful character Peg Bowen (who the children are convinced must be a witch), and the raptures of nature.

Despite all that, I rather think the sequel has been letting its predecessor down.  I’ve always read these books as a unit before, never stopping to analyze them separately, which I think is why I never realized how good The Story Girl is…because The Golden Road doesn’t live up to it.

Let’s start with the titles.  The Story Girl is more an ensemble cast than any of Montgomery’s other books (The Tangled Web excepted), but The Story Girl does get to tell a lot of stories.  The day-to-day adventures resonated with me more, but I think it was important to have The Story Girl at the center of the book after all…because she told far, far fewer stories in The Golden Road (something pointed out by Waterson’s Magic Island which I then observed) and, contrary creature that I am, then I missed them!

The Golden Road refers to the golden road of childhood, which by the end the characters are beginning to leave behind.  I think it put a kind of wistfulness on the book that had been absent in the previous one, alongside a kind of sentimental nostalgia that may have grown heavy-handed.

Usually masterful Montgomery was also rather heavy-handed with foreshadowing that Cecily, unlike the others, would never live to leave the golden road of childhood.  She doesn’t actually die, but it’s foreshadowed again and again in a way that felt both unnecessary and forced.  Cecily felt rather shoved into the Beth (a la Little Women) mold, of the girl too good and innocent to survive to adulthood.

Despite the issues, there is still a lot that is good in here too.  There are exciting and funny encounters with Peg Bowen, a poignant and engaging opening of an ancestor’s wedding trunk, and a short story supposedly penned by an older Story Girl, telling a fanciful and romantic love story.  We also see the return of The Story Girl’s absentee father, who fits right into the pattern Montgomery’s own father bequeathed to Montgomery’s literary father characters (absent yet loving and beloved, blameless in abandoning his child, and eventually returning to whisk the child off to happy togetherness).

I can honestly say that I don’t believe Montgomery ever wrote a bad novel.  But I think I was right after all about this duology being a weak link in her collection.  Only, it’s much more the second book than the first.  By all means read the first, and the second is worth the read too…it’s just not ever going to be a favorite of mine!