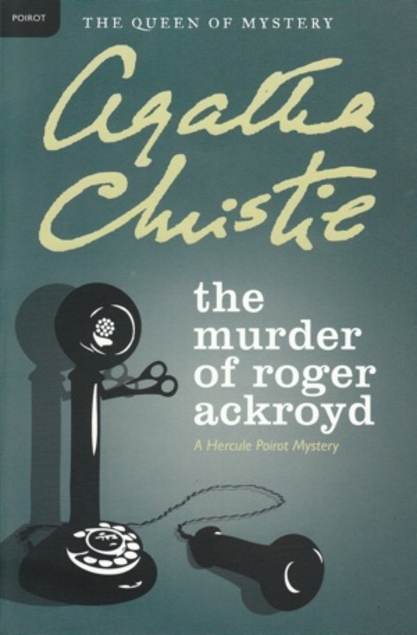 Dr. Sheppard fills in the Dr. Watson role, to the extent that it’s even remarked upon at one point in the story.  He had an engaging voice, and it was a bit fun to see someone who did not know Poirot well describe him.  I’ve also often found Hastings, Poirot’s usual “Watson,” to be rather irritating (so sure he’s right and he never learns that he never is) so I found Sheppard more appealing in that way.  He also has a sister, Caroline, who is an inveterate gossip and good comic relief in the murder mystery.

I won’t tell you the twist ending (though I will tell you that the Wikipedia plot summary gives it away), but I will say that Christie pulled the whole thing off masterfully.  It would have been a shocking twist if I hadn’t known it, and since I did know it, I could see how cleverly she arranged everything.  This was only Christie’s sixth novel, in comparatively early days of detective novels, so I can only assume it was even more stunning in its first publication.  She helpfully points out some of her own clever deceptions at the end of the novel, something that was rather charming–and perhaps necessary to sell the ending.

The British Crime Writers’ Association voted this the best crime novel ever in 2013, and I have to agree that it’s an excellent Christie novel.  If you’re new to Christie or a fan, this is one that has everything: Poirot, intricate clues, a closed circle of suspects, and a brilliant twist.  And if you happen to want to try Christie on audiobook, Hugh Fraser is an excellent reader.

One thought on “Book Review: The Murder of Roger Ackroyd”