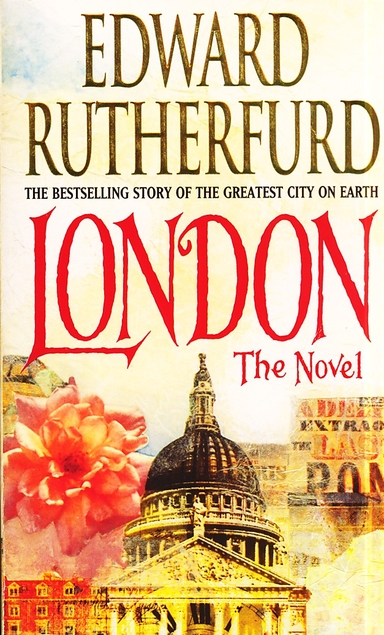 My book consumption, in terms of quantity, slowed down significantly in March, because I spent weeks reading just one book: London by Edward Rutherford.  1,200 pages of fairly small print, this is pretty much the definition of an epic tour de force.  It was a big undertaking (and I didn’t realize it would be so long until it arrived on the library’s hold shelf!) but it was definitely worth it.

London is historical fiction, with a little more emphasis on the “historical” than I usually like.  It begins, technically, four hundred million years ago with the formation of the Thames river valley.  It begins properly (on page 4) in 54 BC, in the Celtic village of Londinos on the Thames, where word has come of an approaching conqueror: Julius Caesar.  Starting with one family and gradually adding on more, Rutherford traces the history of London and several interlocking family trees down through the centuries.  The last chapter, an epilogue, is set in 1997, the year of the book’s writing, although the last proper story is during the Blitz.  I loved this way of telling a story, of a city and of its people.

It may have helped that I love London–I’ve never lived there, but I’ve visited five times and I miss it when I’m away.  I also enjoy British history, so most of the major developments I had some initial familiarity with.  There was still plenty in here I didn’t know and, more importantly, Rutherford brought it all to life with a beautiful balance of individual lives set against sweeping developments.

The book is almost a series of short stories, sometimes jumping decades or even centuries between chapters, particularly in the early years.  In each chapter, we get to know the principal members of our several families in that generation.  (The family tree at the beginning of the book was invaluable.)  Some characteristics and personality types recur within families through the generations, and we can generally see how fortunes rise and fall through generations, or how the decisions of one generation influence the lives of their grandchildren or great-grandchildren.  I was so intrigued to see stories with such long, long arcs through time.

Rutherford provided good transitions between time periods and good background history to give the right setting to each generation of characters.  He brought so many eras to life–I’ve seen Shakespeare’s era plenty of times, but I don’t know that I’ve ever seen Londinium (London under Roman rule) or the early Middle Ages.  I now want to read more about those very early eras.  He also clearly went by the rule that human nature doesn’t change–people are people in every era, and their lives seem just as complex as the lives of people in later centuries, and motivated by similar desires and struggles.  Some stories were sad, but most ended up happily.

All of Rutherford’s principle characters are fictional, but many brush up against historical figures–Shakespeare has a cameo, a few different kings feature, and Chaucer has a decent-sized role, among others.  There’s a lot of real history in here, from real people to real events, like the building of the Tower of London, or the peasant revolt of the 1300s.

The book did bog down for me a bit during the English Civil War.  Most of the chapters deal primarily with a fairly short period of time in some detail, but around this point Rutherford started telling a more lengthy story, covering a lot of years with less in-depth scenes.  It also got into a lot of political and religious conflict that just didn’t engage me as much, and a lot of the people were not as likable as in other generations.  However, it did turn around and pick up again in the last few centuries.

Along with that semi-warning, I’ll offer a trigger warning that about 800 pages in there’s a rape scene.  It’s brief but violent.  Up until that point, Rutherford definitely went out of his way to avoid sexual violence (and there were several opportunities he side-stepped), so it took me especially by surprise this deep in the book.  That was the only one, though.  So now you have the warning I would have liked!

This book really is a massive undertaking, and possibly the longest I’ve ever read–but it was pretty awesome.  And now I want to read Rutherford’s book on Stonehenge…but maybe not right away! 😉