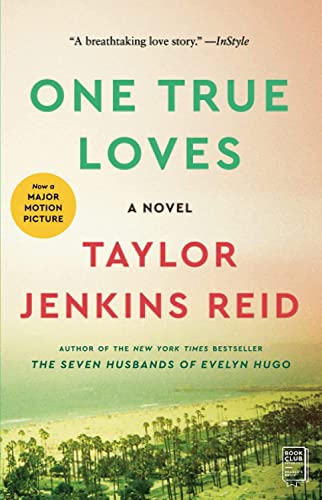 I think that’s ultimately why I liked this book as much as I did.  Though it is about a love triangle, it swiftly becomes clear that it’s less about which man Emma loves and rather who she is and which life she wants.  Each man represents a different path – Jesse is a bit of a bad boy adventurer, while Sam is more sweet and stable.  Though Emma struggles some with who she loves, she and the book soon acknowledge that loving someone isn’t the only factor in whether you can (or should) spend your life with them.  I liked the nuance and depth brought to the question, and found the exploration of the ideas very satisfying.

Roughly the first third of the book is looking back on how Emma met and loved each man, with a very difficult grief section in between (which led me to go hug my husband and tell him not to fly a helicopter over the Pacific, please).  This part was well-written and necessary to the full book, although I found I was more engaged once we got back to the “present” and the central conflict of Jesse’s return.  After that this was almost a page-turner (in a very different way than Evelyn Hardcastle!) to find out what Emma was going to decide.  I also liked that it really felt like a story of a woman deciding, not two men fighting over a woman–which is quite a different thing.

I also enjoyed Reid’s Maybe in Another Life, so I may be trying other books by her.  I’m thinking no on Forever, Interrupted because just the summary depressed me (apparently the husband stays dead in that one) but I’m intrigued by The Seven Husbands of Evelyn Hugo.  I’ve had good luck with a similar title 🙂

One thought on “Book Review: One True Loves”