I didn’t read as many books in September as I normally do, in part because I spent the first half of the month traveling.  Definitely worth it–but it leaves me a little short on books to review now!  So I thought for something different, I’d share a few photos from my recent travels.  There are even book connections–as the friend I went with and I like to say, it was something of a literary tour.

The Opera Garnier in Paris, besides being quite stunning in its own right, is also the home of the Phantom of the Opera.  And therefore very interesting to me!  If you’re ever there, take a tour, and see the famous chandelier.

Not far away stands Notre Dame Cathedral, home to Quasimodo the Hunchback.  This was particularly fun to see as my friend and I saw a play version of The Hunchback of Notre Dame just a week before we were at the real Notre Dame!

And speaking of plays and the Phantom, one of the trip’s highest highlights was seeing The Go-Between, starring Michael Crawford.  30 years after originating the role of the Phantom, he still has a singing voice that should make any right-thinking Christine swoon!

There’s another literary connection too, as the play is based on the book of the same name.  The book is relatively obscure, but you may recognize the opening line: “The past is a foreign country.  They do things differently there.”

My favorite London literary connection is in Kensington Gardens, one-time favorite haunt and book setting of J. M. Barrie, currently home to the statue of his most famous character, Peter Pan.  And if you believe Barrie, home to the fairies as well. 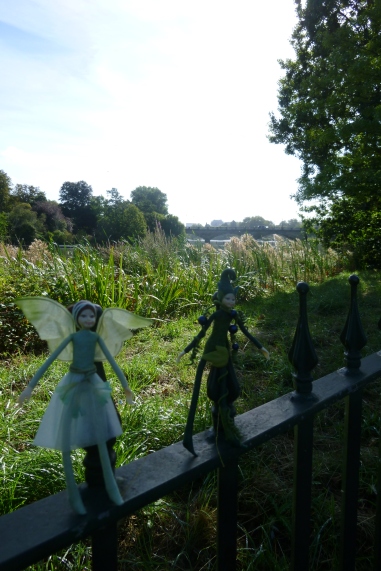 I may have arranged a few photos with Barrie’s fairies in mind…  I worked on a short story involving fairies in Kensington Gardens while I was traveling.  Perhaps eventually I’ll post it here and tell you more about these two.

Meanwhile in another part of the city, there lived a very famous detective–at least according to Sir Arthur Conan Doyle.  I highly recommend the museum–it’s not large and the ticket price is slightly exorbitant, but it’s worth it.

One more stop meant heading out to Stonehenge–but I have LOTS of pictures there, so I’ll save it for another day and its own post!  Have you ever been to the setting of a favorite story?  Where would you like to go?

I hope you had a wonderful holiday this past week!  Last Saturday I posted a photo of my Christmas decorations, and this Saturday I thought I’d share some decorations on a much larger scale…  My church has a brilliant and creative liturgist, and some very elaborate decorations.

I learned in Notre Dame that my camera doesn’t do well in large churches, even well-lit ones, but hopefully you can get some idea of the scene… 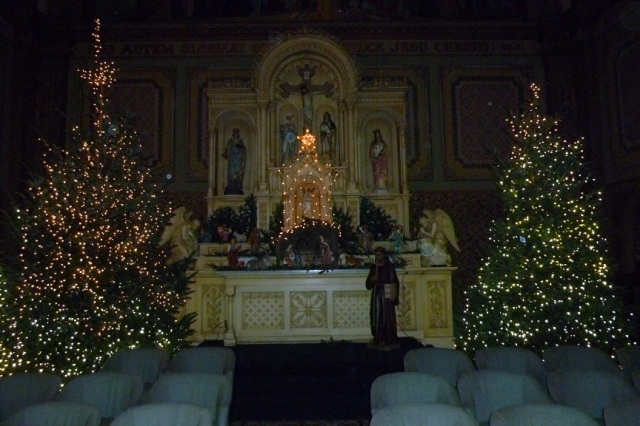 Closer view of the nativity–we’re a Franciscan parish, so the St. Francis statue gets prominent placement.  It’s appropriate too, since Francis began the tradition of creating nativity scenes.

This shows the Advent wreath, newly decorated in gold for Christmas, above the new altar, with the pews beyond.  It was much brighter in person…  I volunteered to help decorate this year, and it’s fun getting that wreath up!

Did you see any impressive Christmas decorations this year?

Visit West Metro Mommy for more Saturday Snapshots, and have a great week!

I’ve mentioned knitting projects a few times before, and they always make a good thing to share for Saturday Snapshot…  I finished my most recent project on Thanksgiving, which was perfect timing for wearing it to family gatherings–and for a sudden cold snap we’ve had this week!

This isn’t the most accurate of pictures, as it’s more purple in life, and not so sparkly–but I thought it was a cool shot anyway.  My next scarf will probably take until next winter, as the plan involves seven different colors and will be 14 feet long…perhaps something to share another Saturday? 🙂

Have a nice weekend, and visit West Metro Mommy for more Saturday Snapshots!

Since Halloween was just this past week, it seems like the ideal weekend to share a shot of my favorite Halloween decorations I saw this year… 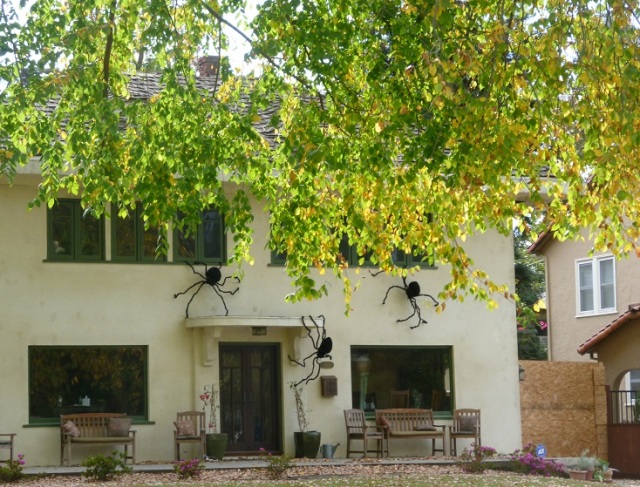 This invasion of giant spiders is so much fun…although maybe I think so because I don’t have a fear of spiders!  But I love the way there are no other Halloween decorations, nothing to tip off that it isn’t really an invasion.  There’s a certain subtlety to it–if you can talk about subtlety in connection with giant spiders!

I hope you had a wonderful Halloween!  Visit West Metro Mommy for more Saturday Snapshots. 🙂

This is a great time of year.  It’s starting to get cold enough for tea and hot cereal in the morning (very cozy!)…but I can still get fresh berries to put on top! 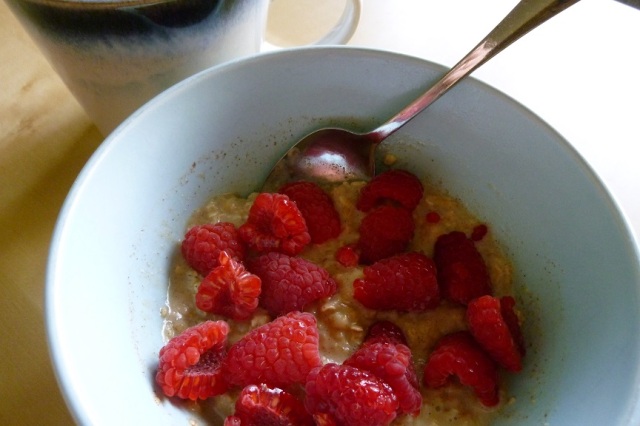