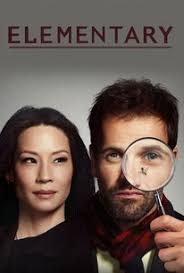 I was recently lamenting Hollywood’s apparent need to force all platonic, opposite-gender characters into romantic relationships, and received a recommendation (thanks, Beedrill!) to check out Elementary as a contrast.  Happily, my library had Season One on DVD, and I had an opening in my “mystery show” viewing slot.

Elementary is a Sherlock Holmes-reimagining, set in modern-day New York (though Holmes is still British), following the adventure of recovering-addict and consulting detective Sherlock Holmes (Jonny Lee Miller) and his sober companion/eventual friend Joan Watson (Lucy Liu).  Consulting with the NYPD, it follows the usual mystery show format of a murder-a-week, with a later in the season arc involving archenemy Moriarty.

I was reluctant to watch this show back when it first appeared because the gender flip of Watson was weirding me out.  I think gender flips in general are interesting, but I had assumed Hollywood would do what Hollywood does and wind up with an eventual Holmes/Watson romance which just feels deeply, deeply wrong on some level, no matter who is what gender or orientation.  So it was good to hear that wasn’t the direction the show went, and I can verify that at least in Season One there isn’t even a hint of romantic interest between the show’s principal characters—which I find all to the good, because their friendship is more intriguing.

END_OF_DOCUMENT_TOKEN_TO_BE_REPLACED 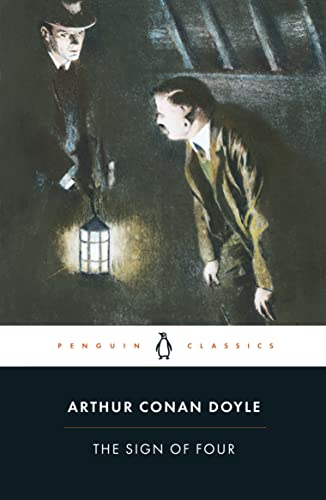 I always like to get some Sherlock Holmes in during the R. I. P. Challenge–by which I mean Sir Arthur Conan Doyle, though I’ve enjoyed some adaptations too.  This year I read The Sign of Four, which I’ve been meaning to read ever since I went on the Sherlock Holmes walking tour in London (in 2012, so it’s been a while).  The guide talked about the plot, and I realized I didn’t remember a story about a one-legged man and a chest of jewels.  I bought a Complete Holmes years ago, and have now completely lost track of which parts of it I’ve read…

Now that I’ve read The Sign of Four, I’m pretty sure I hadn’t read it before.  I might have forgotten the one-legged man, but I would have remembered the novel that introduced Watson’s wife!  She comes to 221B Baker Street because of a mysterious letter relating to her father’s disappearance.  The disappearance is quickly solved, but in the process, Holmes and Watson are set on the trail of a murder, a vanished treasure, and a one-legged man. END_OF_DOCUMENT_TOKEN_TO_BE_REPLACED 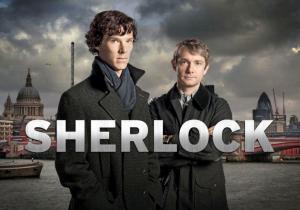 I hear that there was something important going on with football this past weekend…  Personally, I found it far more exciting that the BBC’s Sherlock was finally back!  It already aired in England, but it was back at last in America.  Sherlock is on its third series (or season), so there will be spoilers for the previous two.  I’ll try to avoid spoilers for this episode.

The usual method for each 90-minute episode of Sherlock is to solve one major case.  There is a case here, one involving a terrorist attack, but that takes a backseat to Sherlock’s (Benedict Cumberbatch) return from the dead, and his reunion with all the other characters, particularly John Watson (Martin Freeman).  And then, of course, there is THE question–how he managed to fake his death to begin with.

Series Two ended with that absolutely killer cliffhanger, on how Sherlock faked dying by jumping off a building, and we’ve been waiting two years for an answer.  In many ways, I think the show writers set themselves up for an impossible task, to somehow deliver an episode that can live up to that kind of anticipation.  And yet, I feel like they succeeded, mostly by deft uses of humor and occasional sleight of hand.

The answer to THE question?  Well, I’m certainly not going to tell you that!  But I will tell you that the show provides three possible explanations, and winds up by being a bit ambiguous about whether we have the true answer or not (and makes a joke about the listener being disappointed).  I think it would be enormously fun if they keep providing alternate explanations over the rest of the season!  If they don’t, I still feel satisfied.  I have an answer, and if Sherlock wants to be enigmatic about the answer, I can live with that.

Sherlock’s reunion with John is an absolute work of genius.  It’s hilariously funny, while somehow also having some real character depth to it as well.  And there’s a less funny, more sentimental moment later on too.  They could have gone completely towards the dramatic for the reunion, but I think it could so easily have gone cloying or flat.  Comedy was the right choice, and those scenes reminded me just how brilliant this show really is.  I’ve been so focused on THE question of the cliffhanger that I almost forgot to miss the show for itself, rather than for the answer to the mystery.

For Doyle fans, there are some nice moments harkening back to the original stories.  Mrs. Hudson first knows Sherlock is back when she sees his silhouette through a window, which directly reflects how Watson knew Holmes was alive in the short story.  There’s also a minor case Sherlock solves in this episode that reflects the plotline of one of the short stories.  And then the title, of course–“The Empty Hearse” is such a fun play on “The Empty House,” Holmes’ return short story.

This episode is definitely not a starting place for the series on a whole, but if you saw the previous two series, this is a wonderful return.

And I swear, Sherlock really is the good-Khan (or Khan is the evil-Sherlock, however you want to look at that!) 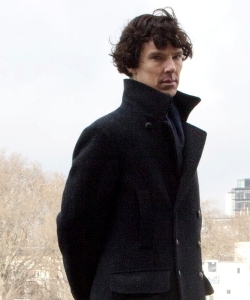 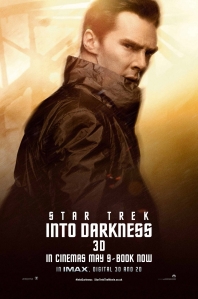 This week’s Book Blogger Hop question: Halloween Edition: What is your favorite horror novel and why?

I am not generally one for actual Horror novels…I’m not sure I’ve ever read one!  I know other people like them, but I don’t feel any need at all to fill my head with ghastly ideas.

However–I do like a good shadowy Gothic novel now and then, which is the closest I come to Horror.  My favorite is The Hound of the Baskervilles by Sir Arthur Conan Doyle, an adventure of Sherlock Holmes and Dr. Watson out on the misty moor.

Holmes and Watson generally seem so indelibly placed in 221B Baker Street and the streets of London.  In a way, I think what I like in this book is the changed atmosphere.  I’m never tired by their usual setting, but the juxtaposition of urban Holmes and Watson in the Gothic landscape is great fun.  And maybe I like venturing into the creepy and mysterious with familiar friends. 🙂

This book also features what may be my very favorite Holmes-story moment, when Watson goes out to confront the mysterious man on the moor, and he’s waiting for him to come, and the tension builds and builds, and then–but that would be telling!

Do you read Horror, or any related genres?  What’s your favorite spooky or horrifying novel?

My favorite source for reading experiences is kicking off another seasonal challenge: Stainless Steel Droppings is hosting Readers Imbibing Peril (RIP) celebrating autumn with books on the darker side.  This laid-back reading challenge focuses on mysteries, gothic and horror.  Even squeamish-me is looking forward to the fun!

I must admit, this doesn’t align with my favorite genres with quite the serendipitous perfection of the Sci Fi Experience or the Once Upon a Time Challenge, but I do like a good mystery now and then, and I have a few shadowy novels in mind. END_OF_DOCUMENT_TOKEN_TO_BE_REPLACED