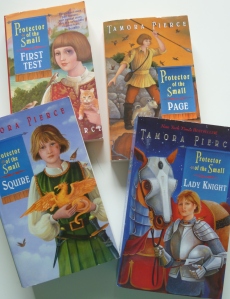 As part of my personal quest to re-read all of Tamora Pierce’s Tortall series (18 books!), I re-read her Protector of the Small quartet during March…then took forever to get to this review!

The heroine of Pierce’s third Tortall quartet is Keladry of Mindelan.  The first time I heard about this series, she was described as a girl with a knack for animals who wants to become a knight.  And I thought…well, isn’t that just a combination of The Song of the Lioness, about Alanna who wants to be a knight, and The Immortals, about Daine with her magical knack for animals?  It kind of is–but in most ways it’s not.

Alanna had to disguise herself as a boy to get her shield, but after her friend Jonathan becomes king, he decrees that girls can become knights.  Then for ten years, no girl ventures to try it.  Finally Keladry comes along, the daughter of a diplomat’s family who has lived most of her life in the Yamani Islands (a very obvious take-off on Japan).  Alanna is her hero (should I say heroine?) and she dreams of becoming a knight so she can protect the defenseless.  She becomes a page, but faces fierce challenges from boys and even instructors who don’t think a girl can be a knight.

The first three books (First Test, Page and Squire) follow Kel through her training, and the fourth book, Lady Knight, is about her first adventure as a knight, mostly commanding a refugee camp during a war.  (Sorry if that was a spoiler to tell you she does eventually get her shield…) In the first book Kel is only ten, but like Alanna, she’s a very OLD ten-year-old.  To diverge slightly, I actually have a theory about this.  Pierce originally envisioned Song of the Lioness as an adult book.  I’m guessing when she decided to make it YA, some editor told her the characters had to be younger, so she dropped five years off their stated ages; all of Alanna’s peers act pretty consistently five years older than they’re supposed to be.  Once Pierce had established that pages start training at ten, she was stuck with that in this quartet too.  I think my actual point here is, don’t be off-put by a quartet that starts out about a ten-year-old.  Kel never feels that young, and she gets older quickly.

The animals turned out to be a relatively minor point; Kel has a bad-tempered horse, a disreputable dog and a flock of very clever sparrows, but the intelligence of the animals is largely chalked up to Daine’s presence at court.  She has powerful magic that sort of seeps into the animals around her.  Kel doesn’t have any magic of her own, the only Pierce heroine not to have some kind of magical ability.

Protector of the Small is in many ways a transition series, both for Pierce’s writing and my personal engagement with the books.  These were written when I was in high school, so I read them later and less frequently than the first two quartets.  I’m not sure, but this may be only my second time through the series.  I like them, but I don’t madly love them the way I do the first two quartets–but I don’t know how much of that is simply my personal history and familiarity with them.  I do know two people who say these are their favorites.

I like Kel, but I don’t love her.  I admire her very much–more than Daine, if I really stop to compare admirability.  Kel is tough and brave and, as the quartet title suggests, constantly trying to protect those around her.  She wages a campaign against bullying among the pages in the first book, and gets into the defense of battered women in the second.  In the fourth, she’s fiercely protective of her refugees.  She’s a great character and a wonderful role model for girls.  And I do like her–but somehow I don’t quite love her.  Maybe she’s a little too serious, or a little too righteous, or maybe I just met her later than I met Alanna and Daine.  She’s inevitably the other lady knight.

Alanna is back in a small supporting role, and I’m always thrilled to see her.  Jonathan, Daine, Numair and a handful of other major characters from earlier books also have roles again, most notably Alanna’s friend Raoul, who if anything has a bigger part here.  As ever, it’s fun to see how characters’ lives are going along.  There are many good new characters here too.  My favorite is Neal, Kel’s very funny best friend (him I love), probably followed by Tobe, an orphan Kel takes under her wing in the fourth book.  There’s also a perfectly dreadful villain, Joren, who matches Duke Roger for charming viciousness.

I mentioned transitions in Pierce’s writing–Protector of the Small is definitely a changing point from the simpler earlier books to the more complex ones she’s writing now.  It’s a little hard for me to explain how they change, because Song of the Lioness has complex characters and complicated plots and good writing…but somehow the more recent books feel denser and grittier and more mature.  They do get darker, especially the fourth book, and the third and fourth are both much longer than earlier ones.  They were written right about when Harry Potter was getting popular, and Pierce directly thanks Rowling for opening the door to longer YA books.

There’s something more realistic about this series, although I’m struggling to put my finger on it.  Tortall has felt like a real, complex world from the beginning, but there is a certain amount of sorcery and legend feel to Song of the Lioness.  Protector of the Small has less magic, and it gets into practical things like politics, diplomacy, the complications of supplying a band of knights, the difficulties of the legal system…  Alanna went through tough training, but Kel seems to keep count of the specific training and the bruises involved much more.  It’s just a bit of a different feeling.

In a way this quartet occupies an unfortunate space–I think I’d be more enthused about Protector of the Small if I didn’t love Song of the Lioness so much.  It really only falls short by comparison–and to be not as good as one of my most favorite quartets ever…well, that’s barely a criticism, really.  So, if it isn’t already clear, let me just say that this really is an excellent set of books, a fantasy series that is nevertheless gritty, with characters that are engaging and very human.  Well-worth reading.

And now I’m down to just two more Tortall books to re-read!  Stay tuned for a review of the Trickster books soon.  🙂

Other reviews:
Respectable Collection
Young Adult Fiction & Whiskey Sours
The Literary Tally
I found a strange lack of reviews…I know other people are reading Pierce!  Point me to your reviews!  🙂

5 thoughts on “Another Lady Knight-to-be”