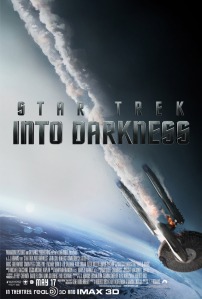 I went to see Star Trek: Into Darkness on opening night, and can happily report that I thoroughly enjoyed myself…although in the end, I feel mixed about the movie.  It was a very good time–and yet there are issues.  I feel rather that way about the previous movie too, although the particular issues are different ones.  The first (eleventh) movie had rather a mess of a plot but excellent characters and some fantastic moments.  This one had an engaging plot, made rather a mess of the characters…and had some fantastic moments.

The movie opens with the Enterprise on a routine survey mission that is on the brink of going horribly awry.  This felt a lot like an old-style Trek adventure, and was a very fun way to start the movie.  Kirk breaks regulations to pull a victory out of chaos, but is still smacked-down by Starfleet for breaking the rules.  This is quickly set aside, however, when Starfleet comes under attack from the mysterious John Harrison (Benedict Cumberbatch) and the Enterprise sets out to round up the fugitive.  Beyond that, it’s hard to discuss plot without serious spoilers.

Suffice to say, the plot was at times implausible or convoluted, but also exciting and engaging.  There are some good twists and very good chase sequences, although some of the action parts went on longer than necessary.  And there were far too many flashing lights! 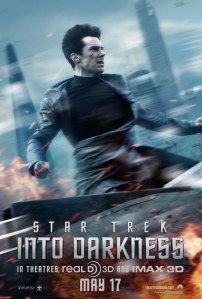 But  there was also Benedict Cumberbatch.  Pardon while I gush.  I don’t think I would have enjoyed this movie half as much without Cumberbatch.  Whatever was wrong with the characters (I’ll get to that), the problem was not the villain.  He was completely awesomely amazing  every time he was on screen.  He was one of those villains who is just so damn cool that you want to root for him–while realizing fully that he’s a horrible person who must be stopped.  I’ve only ever seen Cumberbatch before in Sherlock, and this was like the evil Sherlock.  Sherlock if he really was a pyschopath, and not nearly as funny.  So.  Brilliant.

They hold back the reveal on his, shall we say, secret identity for quite a while and I won’t reveal it either.  But I heard a definite exhale go through the audience when it finally came out.  If you’re on the fence about seeing this movie, it’s worth it for Cumberbatch alone.

But he isn’t the only good thing in the movie.  Scotty, McCoy and Chekov are all really delightful every time they’re on screen–which, in the case of McCoy especially, was not often enough.  There are some very funny moments, which was good and bad–and I think that brings me up to why I feel mixed.  Some of the lines made me laugh…except that the characters shouldn’t have been saying them.

I had problems with the portrayal of the characters, and when I say “the characters” I think I mostly mean Kirk, though not exclusively.  Part of the trouble is the whole “prequel” concept that they set up in the last movie.  At the end of that movie, a group of (essentially) college students were put in charge of the top-of-the-line, pride of the fleet Starship Enterprise.  In this movie, the college students are running things–but they’re still behaving like college students.  They flirt, they argue, they have relationship discussions in the middle of a battle sequence, they disregard regulations and blithely expect to get away with it.

Now I’ll grant you, the original series characters always had their moments.  But there was also always a baseline of professionalism.  There was rank, there was protocol, there were regulations and procedures and a rational chain of command.  And they behaved (mostly) like professionals.  They felt like mature adults.  The dynamic and the interactions in this new movie just didn’t feel right to me for Starfleet officers, or for these characters.

I know this sounds like a nitpick, but the continued unprofessionalism was threaded throughout the movie, and when something is just a little bit wrong every third line of dialogue, that’s not a little thing anymore.  It was everything from Kirk making pointed-ear references (which is McCoy’s sole prerogative) to Sulu or Chekov saying things like, “I don’t know if I can do that but I’ll see what I can manage,” when the only appropriate response is “Yes, Captain.”  And then there was Scotty calling Kirk “Jim,” repeatedly.  Only Bones calls him Jim regularly, that’s what makes him special (or maybe I should say, his specialness lets him do it–not that anyone writing this seemed to understand that McCoy is important.  A different issue).  The worst was when Uhura and Spock had a relationship spat mid-landing party.  People: professionalism!  (The fact that they even have a relationship to have a spat about–that’s so wrong I can’t even touch it.)

The lack of maturity was especially a problem for Kirk, because they apparently decided to give him a character arc about needing to grow up into the role of captain.  And yeah, I know, prequel–except that he’s already captain, with the same crew he had on the original series, and the idea in that context that he doesn’t know what he’s doing yet and that, I don’t know, his pre-frontal lobe is still developing or whatever…no, it just felt wrong.  I love Kirk because he is every bit as awesome as he thinks he is, he always knows what he’s doing, and he always bends the rules in exactly the right way to get a victory and stay out of trouble.  Always.  If they want to tell a story about how he became that person, it should have happened before he was sitting in the Chair.

So much for my rant.  Just when I was getting thoroughly frustrated with things, though, we got into the last half-hour or so…which will be a spoiler to discuss.  So I’m putting it in white, highlight the next paragraph if you want to read it.

Loved the last portion of the movie.  I thought the role reversal of Kirk and Spock was mind-bendingly brilliant.  This is by far and away the best example so far of taking the altered timeline and doing something really clever with it.  Loved the chase sequence with Spock and Khan.  Loved that a tribble was part of the key to saving Kirk.  Loved that Khan was shown still alive–and smiling–at the end.  That man’s not going away (I hope).  Loved that Leonard Nimoy had a cameo.  It was a pretty much unnecessary cameo–except that he’s Nimoy, and therefore is necessary unto himself, it doesn’t have to do anything for the plot.

And though it is about the end, it’s not a spoiler to say that using the original music for the end credits gave me the warm fuzzies.  🙂  Suffice to say as a non-spoiler, the last half-hour was brilliant, and while I stand by my issues with the other portions of the movie, it brought me around to a positive on the movie overall.

Next time–because I trust there will be a next time–I’m hoping for more McCoy (please, more McCoy!), less flashing lights and weird reflections, more maturity from the crew and especially Kirk, and with any luck, more Benedict Cumberbatch!

35 thoughts on “Star Trek: Into Darkness”