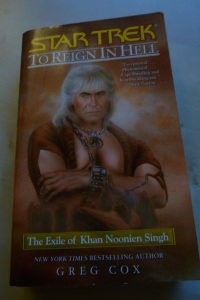 This year for the Sci Fi Experience, I’m off on The Great Khan Adventure, tracing the story of Khan Noonien Singh through books and movies. So far I’ve watched some of Star Trek: The Original Series, and read the first book  and the second book in Greg Cox’s Khan trilogy.

The final book jumps ahead from the 1990s and the Eugenics Wars, past “Space Seed” to Khan’s time on Ceti Alpha V: To Reign in Hell: The Exile of Khan Noonien Singh.  We watch Khan and his crew’s transport down to the planet, the colony’s hopeful beginnings…and then the increasing struggle to survive after Ceti Alpha VI explodes, and the ecosystem on Ceti Alpha V collapses.

The story is told from the alternating points of view of Khan and Marla McGivers, the Starfleet officer who fell in love with Khan and chose exile with him.  As I hoped, we get more depth into Marla and see her emerge as far stronger than she did on the TV episode.  She faces down Khan’s hostile crew, stands up to Khan himself, and perseveres through very trying circumstances.

In part this is possible because Cox also softens Khan, particularly towards Marla.  I think I know now why Khan’s brutality in “Space Seed” surprised me—I had read To Reign in Hell more recently than I’d seen the TV show.  Cox takes Khan on a journey from a well-intentioned, if fierce, leader to a madman obsessed with revenge; it’s a compelling journey, except that I think it downplays how violent and ruthless he was to begin with.

Cox has a nice way of tying things together to explain the little inconsistencies that crop up in Trek.  I was wondering where Marla was, as ship’s historian, when the Enterprise visited the 1960s; the book comments that she was disappointed not to be included on the landing party, and only had the opportunity to assist on the wardrobe.  When Khan and crew first beam down, Chekov is the officer who sees them off, explaining how Khan could recognize Chekov in The Wrath of Khan, when Chekov didn’t join the TV show until the next season (in the real world, Walter Koenig has admitted that he knew that line of the script didn’t add up, but didn’t point it out because he was afraid of having his part cut…)  Cox also explains some details in The Wrath of Khan, like why all of Khan’s crew in the movie is much younger than him, not to mention blond…

This book is effective as a chapter in a larger story, filling in the gap between the TV show and the movie.  Taken in isolation it’s an odd beast, because we spend it exiled with the villain.  I found myself missing Seven and Roberta, mostly for the role they fill as opposing forces to Khan.  Khan and Marla have their virtues and their flaws, but they never really feel like they become heroes of the story—they’re the villain and the woman who fell in love with him.  That complicates the emotional pulls of the story, and isn’t resolved by a very brief frame story with Kirk, Spock and McCoy.

I also think Cox exploded Ceti Alpha VI too soon.  I enjoyed watching the hopeful days of the colony; once disaster strikes, it becomes a hopeless slog for Khan and the reader both, especially when we know how this turns out…and it isn’t good.

The emotional complications are actually increased by the brief frame-story, of Kirk, Spock and McCoy visiting Ceti Alpha V after Khan’s death.  Kirk feels guilty about never checking in on Khan over the years.  Because he’s Kirk, I want a conclusion that says it wasn’t really his fault and of course we all still love him.  Instead, the book makes me feel like he damn well should have checked in…  I’ve had to conclude for myself that it is, in fact, ridiculous to feel that Kirk had personal responsibility for the situation; a colony of genetic supermen clearly falls under the jurisdiction of Starfleet, not one starship captain whose job is not to monitor colonies.  I would have quite liked Cox to make that point for me…

Despite some reservations, the book does fill in a significant chapter in Khan’s story.  It provides a lot of insight into Khan’s character, and expands Marla into a compelling character in her own right.  There’s also quite a bit of action, and of course all those little touches Cox is so good at of tying everything together.

Next up, I’m heading back to the screen for The Wrath of Khan…

Other reviews:
The M0vie Blog
And…that’s it.  Anyone else?

Buy it here: Star Trek: To Reign in Hell