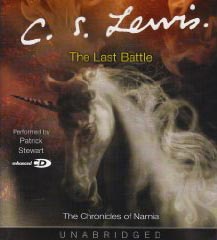 I recently finished my voyage through Narnia on audiobook by listening to The Last Battle.  I began with an exciting narrator, Kenneth Branagh reading The Magician’s Nephew, and finished with another exciting one–Patrick Stewart!  And he was excellent, especially in some of the more exciting moments.

The Last Battle is a decidedly odd installment in the series.  It opens many generations after Caspian and Rillian of the previous book, with King Tirian, “the last king of Narnia.”  In the North, a crafty ape and misguided donkey set up a false Aslan to control the Narnians.  They form an alliance with the foreign Calormens, fell the trees and make plans to enslave Narnia’s people and talking animals.  Tirian tries to stand against them, and is soon joined by Eustace and Jill, sent from our world to help.

The book is much grimmer than the previous ones.  That’s not immediately apparent, but as the book goes on it becomes an increasingly desperate struggle against lengthening odds.  There is ultimately a victory, of a sort, but only on a cosmic level.

And that’s why I’m not sure how to feel about this one.  The end ultimately has a very positive feel to it…but it also renders the struggles of the first half of the book somewhat pointless.  The whole world of Narnia is highly symbolic, of course; I think this may be the one installment where Lewis’ symbolism overwhelmed the adventure aspect of the book.  I didn’t dislike the symbolic, cosmic-level side of the book, and Lewis actually did quite nicely with making eternity seem rather homey–and grand and immense at the same time.  All the same, it sits a little awkwardly next to the adventure side.

I am not entirely sure I’m making sense here, so on to other aspects!

The portrayal of the Calormen is a bit complicated here.  They weren’t exactly nice in The Horse and His Boy, but they somehow become worse here, maybe because there’s a new sense that they’re inherently villainous in some way.  Which is all well and good if Lewis wants inherently villainous Calormen; it becomes more troubling when you figure that, symbolically, Calormen are not really Calormen.  However–Lewis does something to redeem that aspect by giving us one Calormen soldier, who is a devoted servant of wicked Tash but still a good person and still comes into Aslan’s Country.  Aslan ends up telling him, essentially, that good is still good and evil is still evil, no matter whose name you’re doing it in.  It’s a simple message on a complex subject, but as a simple message it’s a nice, open-minded touch.

The question of Susan is another troubling one.  Even if she is a bit of a wet blanket, I’ve always felt bad for her in this book!  Here’s a case where Lewis’ symbolism is probably too vague; I find it hard to know exactly what barred Susan in the end (is it really a love of make-up, or is that symbolic?) so I don’t know quite how bothered to be.  I like to think, though, that the tragedy she experiences (rather off-stage) inspires some new depths of character, and that she eventually comes to Aslan’s Country too.

All the discussion of places within places in this book, many of them bigger on the inside, led me to wonder if Lewis’ wardrobe (a wooden box, you know) with an entire world inside of it might have been an inspiration for a police box that is also bigger on the inside.

I recently rewatched the Lord of the Rings trilogy, and that juxtaposition has made me want to mix things together a bit…and after all, who’s to say that the Undying Lands aren’t an offshoot of Aslan’s Country?  (Well, Tolkien and Lewis could say they aren’t, but I rather like the idea!)

And finally, my favorite moment from the very end of The Last Battle (a bit of a spoiler), is when all the long-dead characters of the series reunite (including my favorite, Mr. Tumnus!) and laugh over old jokes together.  Because really–what good is a heaven if you can’t enjoy old jokes there?

Having now finished the entire Narnia series, I can definitely say that The Magician’s Nephew and The Voyage of the Dawn Treader are my particular favorites, probably because they have the most appealing characters and visit the most interesting places.  All the books are good and the entire series is well-worth exploring.  Even if The Last Battle is more grim, it does serve to put a nice punctuation on the series.

Other reviews:
The Bookworm Chronicles
Life with Books & Movies
Stray Thoughts
My Head Is Full of Books
Anyone else?

Buy it here: The Last Battle

4 thoughts on “The Last Battle for Narnia”