I read The Explosionist by Jenny Davidson so long ago that pretty much all I remembered was that it was set in an alternate history, and there was a sequel I always meant to read.  Clearly a reread was in order before going to that sequel! 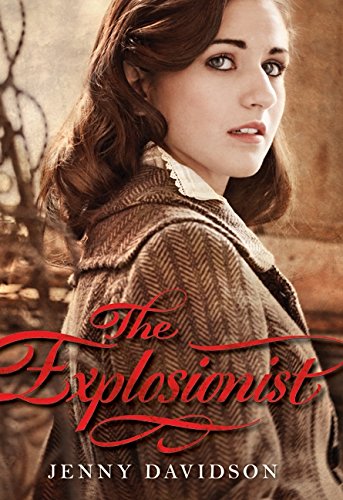 The Explosionist is set in Scotland in 1938–but this is an alternate history, where Napoleon won at Waterloo.  The Northern countries of Scotland, Scandinavia and Russia have united in the New Hanseatic League, in uneasy peace with a united but oppressive Europe.  Sophie Hunter is 15, an orphan raised by her Great-Aunt Tabitha after her parents died in an explosion at a dynamite factory.  Her world begins to unravel with terrorist bombs near her school, an unsettling encounter with a ghost through a medium who is later murdered, and hints of something sinister about IRLYNs (pronounced “Irons”), a patriotic training program for young women.

Sophie is a wonderful portrait of a very intelligent, slightly naive girl who is well-meaning yet often conflicted about what’s best.  She felt very fifteen somehow, just old enough to grasp the magnitude of the conspiracy she begins to uncover, but young enough to still think she can somehow handle it herself–with her best friend, Mikael.  There’s an intriguing thread through the book about the benefit or harm of strong emotions.  Sophie herself is a committed rationalist, who believes that doing away with extreme emotions would be all to the best…though she can’t quite manage it!

This book is part boarding school story, part murder mystery, part conspiracy theory, and part ghost story as Sophie discovers an ability to speak with the recently-dead.  All those pieces somehow balance together, creating an intriguing mystery with a series of surprises and turns.

The alternate history of it all creates some fascinating touches.  The overarching changes to history and government are intriguing, though the small details may be even more fun (if a little silly!)  Many people famous in our own history are famous in Sophie’s world–but for very different reasons, like Freud the radio host, or Einstein the poet…

The Explosionist ends with a big shift and a lot of questions still wide open, which is how it stuck in my mind that I needed to read the sequel, Invisible Things.  (Some minor spoilers for the first book to follow.)  The sequel sees Sophie in Denmark with her friend Mikael’s family, volunteering at a scientific facility headed by Niels Bohr where nuclear fission is a hot new topic.  Europe and the New Hanseatic League are rushing ever closer towards open war, while Sophie begins to uncover new truths about her family’s past.  Halfway through the book, we see an abrupt shift with a terrorist attack (using a gas that alters Mikael’s personality), a new villain, and a quest for Sophie.

I enjoyed The Explosionist a lot, but I’m not sure how to feel about Invisible Things.  Sophie, Mikael and all the rest are still likable and compelling characters.  The premise and the alternate history are still fascinating.  But while the first book had a busy and carefully balanced plot, this book feels like it lost its balance somehow.

Sophie has a very passive role for the first half of the book; there are revelations a-plenty, but Sophie herself doesn’t actually do much.  The stakes get higher and so does the interest level in the second half of the book…but that part also seems like a big departure from everything that came before, and begins to strain credulity a bit in certain ways.  The last portion of the book is a “Snow Queen” retelling, which is a cool idea–yet feels forced in places.

It’s unfortunate, because there are a lot of great pieces in here…they just fit together a little awkwardly.  Still, it was worth the read to find out the answers to some of the mysteries left by the first book, and to see the continuing development of Sophie’s story.  If you like historical fiction with a little fantasy thrown in, or enjoy slightly spooky conspiracies, these books are a fun read!

Other reviews:
Bib-Laura-graphy
Bookshelves of Doom
Frenetic Reader
Anyone else?

Buy them here: The Explosionist

4 thoughts on “If History Was Different…”