There are some definite Types of fantasy books–for instance, ordinary kids finding a magical item/creature, and then coping with the inevitable chaos that results.  Having read two books like that recently, I thought a combined review was in order! 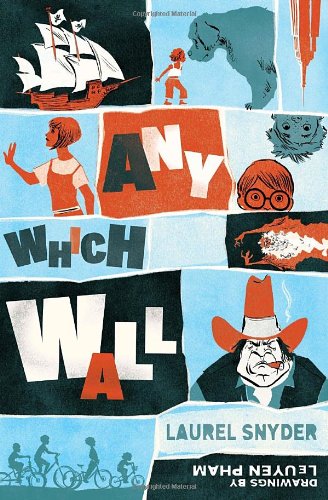 Any Which Wall by Laurel Snyder features one of the odder magical items I’ve seen–a magical wall.  Henry, Emma, Roy and Susan (two sets of siblings) find the Wall out in a cornfield, and discover that they can use it to wish themselves to any other wall.  They find their way into adventures with Merlin, pirates and cowboys, though nothing is ever quite what they expect.

This is a clear descendent of the Edward Eager books–even including some references back (which is particularly fun because Eager always included references to his inspiration, E. Nesbit).  It’s a light book with somewhat low-key adventures, good for a younger reading audience.  Nothing is ever too scary or too big a disaster, though the kids do encounter plenty of things that don’t go as they anticipate.  That may be my favorite part, as they find out that their ideas of history are not carried out by the reality.

I did think there were a couple of lost opportunities where a little more danger and tension could have been pursued.  Their first encounter Guinevere sets her up as seriously creepy…and then that never goes anywhere.  I also thought they took the convenience of the magic a bit for granted.  The first time they use the magic to leave their own town, they don’t have any evidence about how the magic works to get back.  It turns out they can leave by the wall they came by, so to speak, but they hadn’t tested that before landing in Camelot–and the whole thing seemed much riskier to me than it did to any of them!

I have a feeling I would have liked this a lot as a kid.  As an adult, I wanted a little bit more…but maybe that wouldn’t have been right for the book after all!  And for the Type of book it is, it’s excellent.  The kids are likable, the adventures are fun, and they learn some good if not terribly complex lessons in the process of the magic adventures.

There’s also something I like about visiting Anytown in Anytime.  All these magical-item stories seem to be set in the same nice little town where kids ride bikes in the summer (except when they’re set in London), in a vague time period.  This one was more modern than Eager’s books; I think I remember a cell phone or two.  You know what really made it seem modern though?  At one point a father was preparing dinner.  I feel like that wouldn’t have happened in a book fifty years ago… 🙂 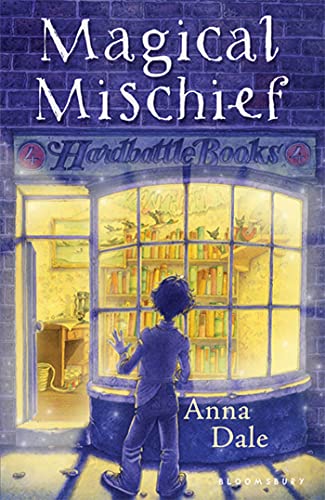 Magical Mischief by Anna Dale takes some twists on the usual Type.  It’s set in a city in England (though not actually London) and centers around a magical bookshop.  Magic takes up residence in Hardbattle Books, and despite the inconvenience (and the smell), Mr. Hardbattle doesn’t have the heart to force it out.  But it’s bad for business and rent is due, so he has to find a new home for it.  He joins forces with Arthur Goodenough, a boy just looking for somewhere quiet to do his homework, and Miss Quint, who’s mostly in search of company.

The magic here has some particularly entertaining features, like bringing a stuffed elephant and the black cat bookends to life, or turning one of the steps on the stairs into custard when it’s feeling rebellious.  Or there’s the pushpins that dance around and occasionally attack…  It also grants wishes in an unpredictable fashion, spurring my favorite thread of the book–Miss Quint gets lonely, and starts wishing characters out of their books.

Now–if you found out you could do that, I bet most of you know exactly what characters you’d bring out for a tea party, right?  I would know!  Miss Quint, on the other hand, picks up books at random and looks for interesting people, which seems like rather a waste of an opportunity.  However, the plot goes in exciting directions because of it, so I’ll forgive her…mostly.  Especially because her random choices brings out Susan, a girl whose only role in her book was to wait by the swings, but in the real world she grows into so much more.  I loved watching her development as a person.

This book has some good humor in it, and a more focused plot.  It’s also unusual to see a kids book with two adults as major characters; Mr. Hardbattle and Miss Quint were both distinctive and engaging.

If you like a particular Type of fantasy book, I would recommend either of these two! 🙂

Any Which Wall
Charlotte’s Library (where I found out about both books, thank you!)
Jen Robinson’s Book Page
Reading Kids Are Dreaming Kids

Buy them here: Any Which Wall

2 thoughts on “A Magical Wall, and Magical Books”