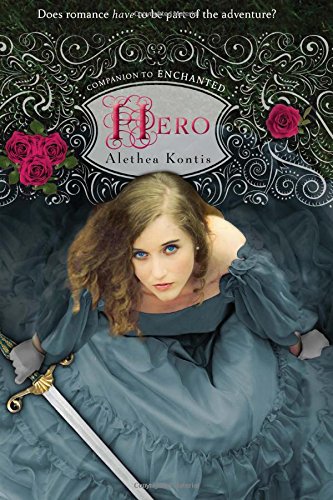 I launched my reading for Once Upon a Time with Hero by Alethea Kontis.  This also goes to my goal of reading more sequels, as it’s the follow-up to Enchanted.

Enchanted introduced us to the Woodcutter family, with their seven daughters, three sons, and penchant for stumbling into fairy tale situations.  Hero focuses on Saturday, the sixth daughter.  She’s spent her life out in the woods, felling trees with her father and brother, and dreaming of journeying in pursuit of a great destiny.  A series of mishaps leads to Saturday’s arrival at the mountain at the Top of the World, where she meets Peregrine and Betwixt.  Peregrine is an Earl’s son who was cursed by a witch’s daughter to assume her place on the mountain, and has been running around in masquerade (and a skirt) for uncounted years.  Betwixt is a magical creature who frequently shifts shape, but always to something combining animals (like a chimaera or a gryphon).  The three join forces to fight the witch, and the sleeping dragon under the mountain.

There’s quite a lot going on here…and I reduced half of it down to “a series of mishaps.”  I had trouble with the first several chapters of this book.  So much happens so quickly that I was beginning to get whiplash.  But then Saturday arrives at the Top of the World, where time moves much more slowly than the rest of the world…and the book slows down too. Rarely do I talk about a book slowing down as a good thing, but this was exactly what Hero needed.  The focus on only five characters on the mountain also helped…

The romance was not what I would call slow, but it still felt more like the normal YA book or chick flick speed.  Peregrine does fall pretty quick (but there’s a magical explanation about these visions he’s been having…) and Saturday holds out for a while longer.

One of the most interesting aspects of this book is the gender-reversal of the two leads.  Saturday is tall and strong and tough, a warrior who’s mistaken for her brother Jack.  Peregrine is described as effeminate, and spends most of the book in a skirt.  It’s a little vague on how much is who he really is, and how much is the curse, but it’s still the prevailing situation for most of the story.  In some ways the book is somewhat heavy-handed on the subject, but hey, I’m always happy to see a fierce heroine in fairy tales!

My favorite part may be Betwixt, the shape-changing creature with a snarky wisdom.  It seems to be a truth universally acknowledged that a hero in possession of a clever animal sidekick will find himself upstaged…

After a frenetic opening, Hero has a somewhat frenetic closing too, mostly (I think) setting up plot threads for the next book (which won’t be out for almost a year!)  That seems to be the fate of second books in a trilogy, and I felt satisfied by the plot threads that did wrap up…and I guess I’ll just have to wait until February, 2015 for the rest!