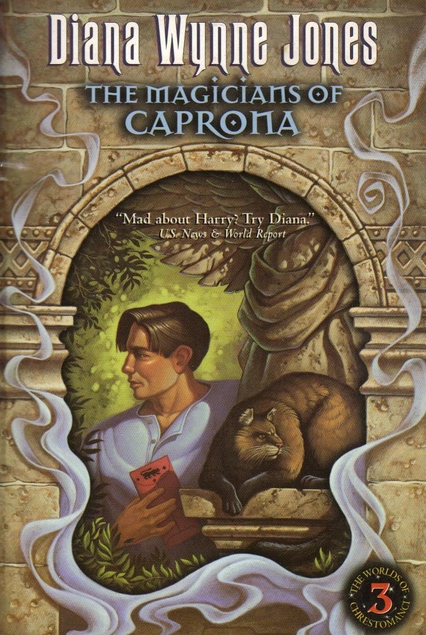 The next book in Diana Wynne Jones’ splendid Chrestomanci series is The Magicians of Caprona. This is another one focused mostly not on Chrestomanci and his Castle, taking the action instead to Italian-influenced Caprona.

In Caprona, there are two great spell houses, the Casa Montana and the Casa Petrocchi, and the two families have been bitterly feuding for two centuries (although they both get on well with Chrestomanci). The story begins with family problems within the close-knit Casa Montana, like young Tonino’s apparent lack of magical aptitude, or the question of finding an appropriate suitor for Cousin Rosa. The situation escalates, with threats from neighboring city-states, and only hope to save Caprona—finding the true words to “The Angel of Caprona,” said to be given by an angel centuries before. Soon both families are on an increasingly urgent search for the song, while forces are massing for war and something sinister is going on at the Duke’s palace…

Here we see again one of Jones’ best types of protagonists, the earnest boy hero, seemingly unlikely to succeed, who discovers hidden abilities. I don’t mean to be dismissive by classifying—it’s a type of story that works very well! Tonino is a particularly appealing boy hero, considering his love of reading, and his talent of talking to cats.  Boss cat Benvenuto is also a delightful addition of the story–I do have this fondness for cats in books, you know! 🙂

I particularly enjoy the spell houses, with their huge clan of aunts and uncles and cousins all living companionably together, making magic and cheerfully getting into one another’s business. It’s warm and friendly and vivid. I also love their magic, which centers around sung spells. Singing off-key or muddling words can (and does) have disastrous consequences.

Chrestomanci has a relatively small role here, though he does make a flying appearance early in the crisis, so his arrival near the end isn’t quite a deus ex machina. Besides, he performs his usual role of not actually solving the crisis, just helping the lead characters to solve the crisis themselves.

I wouldn’t read this one first, because it could make Chrestomanci a somewhat confusing presence, but it’s stand-alone enough to read anywhere after Charmed Life.  I have just one more Chrestomanci novel left, plus a few short stories, which I plan to review soon too!

Other reviews:
Masha du Toit
The Aroma of Books
Readers By Night
Anyone else?

Buy it here: The Magicians of Caprona