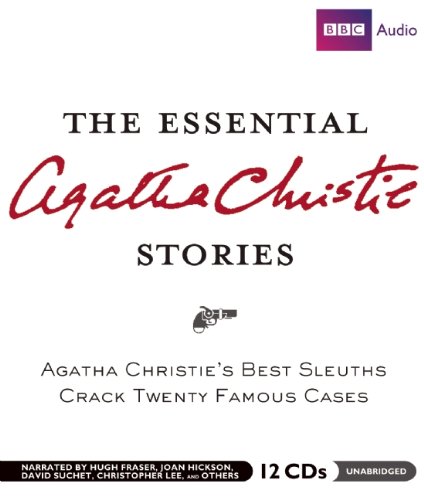 Agatha Christie has been on my “should read” list for a while now, and I did read a couple of her books–but she wrote so many, I didn’t know where to go next.  The Essential Agatha Christie Stories on audio seemed like the perfect solution!

This collection provides 20 stories in 15 hours, with a variety of readers (including Christopher Lee!)  It did exactly what I wanted it to do, giving me a sampling of Christie stories, including three with Miss Marple, quite a few with Hercule Poirot, and a handful of independent ones too.

Overall I enjoyed the stories quite a bit, and I’m impressed that twenty different stories, most of them centering on a murder investigation, held my interest so well.  Christie comes up with clever twists that I usually don’t guess.  Not every story had a satisfying answer to the mystery, but the majority did.

I had been considering picking up a Miss Marple novel next, but now I’m not so sure.  Those three stories were fine, and one, “Murder vs. Opportunity” had a nice twist…but I found I wasn’t that satisfied by how Miss Marple operates.  Poirot claims to base everything on “psychology,” but it seems even more true for Miss Marple…and that doesn’t appeal to me because there’s no answer!  I like mysteries for the sake of the puzzle, and seeing at the end how everything fit together.  Telling me that Miss Marple knew the answer “because she understands human nature” is, for me, dissatisfying.

I think I’m more likely to try a Poirot novel, as I fared much better with him.  My two favorite stories in the collection were both Poirot stories.  The first was “Four and Twenty Blackbirds,” and Poirot combines both an understanding of psychology and physical clues to deduce the answer to a murder, starting from something as simple as a change in the dead man’s habits.

“Murder in the Mews” was my other favorite, one of the longer ones in the collection, focusing on a suspicious suicide.  This one was complex, full of details and a few red herrings, with a satisfying answer in the end.  I listened to this collection on CDs in my car, and this was the only story that got me to take the CD out of the car to listen to the ending after I finished driving for the day.

I also met Captain Hastings in this collection, an apparently regular figure in Poirot stories.  He plays a very Watson-type role, the somewhat blundering friend who narrates the detectives adventures.  He was fun for a few stories, but began to wear on me.  The joke of Hastings thinking he’s being clever when he isn’t only worked a few times, and somehow Poirot seemed to come across as more ridiculous when through Hastings’ eyes.  On the other hand, Hastings did provide the vehicle for a Poirot-narrated mystery, “The Chocolate Box,” told in a nearly story-length flashback.  That was another one with clever details and a good answer to the puzzle.

In the non-Poirot stories, I especially liked “The Girl on the Train.”  It’s full of wild and improbable hijinks, and splendid wit.  Take this paragraph:

“It was true that George embodied a veritable triumph of the tailor’s art.  He was exquisitely and beautifully arrayed.  Solomon and the lilies of the field were simply not in it with George.  But man cannot live by clothes alone–unless he has had some considerable training in the art–and Mr. Rowland was painfully aware of the fact.”

On the audio side of things, most of the readers were good, and Christopher Lee was quite good!  The only sour note among the readers was the final story, “Yellow Iris.”  The reader tried a little too hard to do different voices, I think, and it didn’t fly at all…but nineteen out of twenty stories had good reading to back them.

So, Christie fans–have you read any good short stories from her?  And where do I go next with the novels?  Any Poirot ones I should try?  Should I give Miss Marple a chance after all?  Let me know! 🙂

Other reviews:
Bookshelves of Doom
Anyone else?

(it’s expensive…try the library, that’s where I found it!)