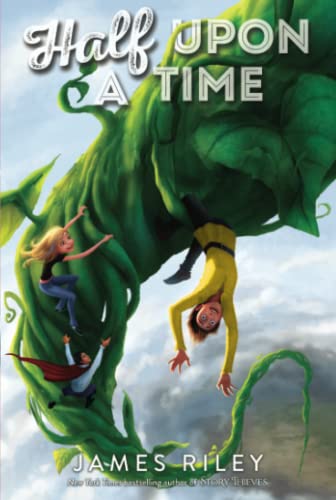 I have been trying to get through my To Be Read List, and trying to believe that I will actually read more fantasy novels than I will add (ha!) during the Once Upon a Time challenge…so I decided to go to the top of the list and read the fantasy novel that had been on there longest.  That turned out to be Half Upon a Time by James Riley, which was on the list since 2010.  On the plus side, the next two books in the trilogy were published in the meantime!

As you can guess from the title, this is a fairy tale-inspired book.  Jack attends a training school for heroes, but his heart isn’t really in it–until a girl falls out of the sky literally at his feet.  May insists she isn’t a princess, but when she’s wearing a t-shirt that says “Punk Princess,” how can there be any doubt?  Soon the two are on a quest to find May’s abducted grandmother, who just might be the long-missing Snow White.  With the Huntsman on their trail, they fight a giant and a witch in a candy cottage, make an alliance with Prince Philip and a more uneasy one with the Wolf King, and try to find the magic mirror that may have a clue to locating Snow White and defeating the Wicked Queen.

This is another “throw lots of fairy tales together!” book, but I thought it worked quite well.  Since Jack and May are traveling on a quest, it felt natural that they keep bumping into new fairy tale elements.  Most are also tied together in some way, through their roles in the Great War between Snow White and the Wicked Queen.  The story is fast-paced between all the new adventures and obstacles, and there are some fun twists.  For instance, the Wolf can change shape from man to beast, and Red Hood has a cloak that makes her invisible.

I liked this book…but I didn’t love it, and I think that was because of the characters.  There’s no real flaw–they just didn’t grab me either.  Jack is clearly a fairy-tale-Jack, the non-royal, relatively ordinary hero without major warrior skills.  He has a good heart and he’s a nice guy, but he didn’t feel particularly unique to me, or as clever as the best of fairy-tale-Jacks.  May is blessedly not a pathetic princess in need of rescuing, but “spunky fairy tale heroine” has also become a Thing, and she’s a pretty generic version of that.  In a way, I think she adjusts too quickly to coming from our world to the fantasy world, losing some opportunities in that area.

Where this book mostly loses an opportunity, though, is with Prince Philip.  I wrote last Friday about Friendship Triangles in stories, and while there’s some romantic hinting, this book pretty much has a Friendship Triangle.  Philip could have redeemed the whole book, by being the show-stealing Third Character that makes the blandness of the leads matter less.  Instead, he was a pretty bland Prince Charming type…

I don’t want to over-emphasize this, though!  I think a younger reader, or someone who has read less fairy tale retellings, would have been bothered much less by slightly flat characters.  And even I wasn’t bothered exactly…I just didn’t become attached to the characters in the way I want to be.

I still plan to go on to the rest of the books in the trilogy.  There were some clever twists near the end of the book, and hints of others coming, and I want to see how it all turns out.  And who knows–maybe I’ll get more insights into the characters and end up liking them more!

Last chance to win a signed copy of my fairy tale retelling, The Wanderers! Just put #WanderersGiveAway in your comment to enter.  Contest closes April 30th!

Other reviews (and they all loved it, so go figure!):
The Book Cellar
Transcribing These Dreams
The Maiden’s Court
Anyone else?

Buy it here: Half Upon a Time

4 thoughts on “Up a Beanstalk and Into a Woods”