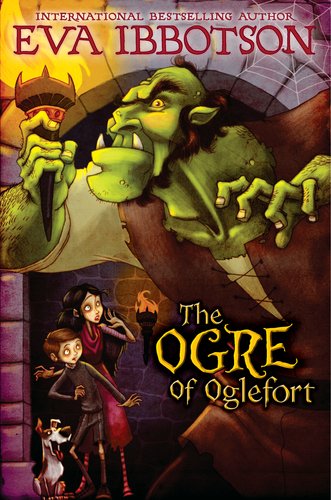 I feel sure I must have read something by Eva Ibbotson before…she’s one of those names that floats around in fantasy.  But I can’t come up with anything, so it seems that Ogre of Oglefort is my first Ibbotson.  There may be more! 🙂 As you can already guess from the title, this is another one for Once Upon a Time.

The Hag is a witch who runs a boardinghouse for Unusual Creatures.  When her familiar goes on strike, she lets herself be persuaded by Ivo, an orphan boy, that he can fill in, at least for the Summer Meeting of Unusual Creatures.  But while they’re at the convention, the Hag, Ivo and their friends, Ulf the troll and Dr. Brainsweller the wizard, are charged by the Fates with a quest: to rescue Princess Mirella from the Ogre of Oglefort.  They reluctantly set out…only to find, when they arrive, that the Ogre is the victim, harangued by unhappy people who want him to turn them into animals.  Soon they find themselves defending the castle against an invading army, some nasty ghosts, and the Ogre’s awful Aunts.

All in all, this is a cute and fun fantasy, very much on the lighter side.  It reminds me (and I don’t say this lightly!) of some of Diana Wynne Jones’ younger-targeted books.  I think Ivo is about ten, and that’s probably a good reading age too, or a little bit younger.  It’s a good adventure for that age, and a quick, fun read for adults.

Besides being just generally fun, older readers will likely also appreciate the theme that runs through the book about individuality.  Most of the characters are in some way misfits, or at least contrary to what’s expected of their type.

Princess Mirella is more interested in animals (even bugs!) than dancing and betrothals.  The troll ends up nursing the sick Ogre.  Dr. Brainsweller is extremely educated as a wizard but very inept in normal life, and eventually realizes that wizardry is not really what he cares about most.  The Hag is a very kind witch, and Ivo is looking for a very different life than the one he has in the orphanage.

This theme is paired very nicely with the second theme about finding a home and a family.  Everyone wants to be their true selves, and to find a place and people where they will be accepted.  The main characters swiftly form a (slightly unusual) family, and start creating a home at Oglefort.  The adventures and conflicts that follow largely center around defending that home.

With delightful twists on traditional character-types, humor, adventure and deeper underlying themes, this one is definitely recommended!  Has anyone else read other Ibbotson books?  What should I try next?

Buy it here: The Ogre of Oglefort