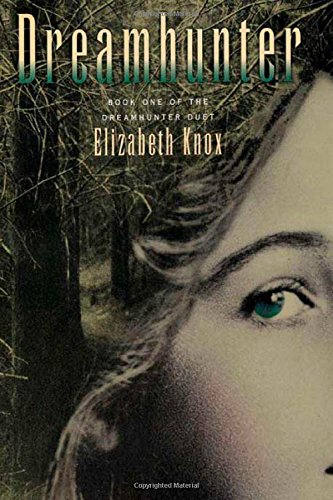 In a happy overlapping of challenges, I recently completed a long-time half-read duet of books, and got another read in for Once Upon a Time!  I first read Dreamhunter by Elizabeth Knox several years ago, and never managed to get to the second book.  So I reread the first one a few months ago, then read Dreamquake during April.

The two books are set in an island country near the beginning of the 20th-century…with a crucial difference from the world we know.  Certain people are able to enter The Place, a barren wasteland overlapping the normal world, and much larger within than its external geography.  Among those who can reach The Place, some have the ability to catch dreams, and then to return to the normal world and share these dreams with others.  Devoted cousins Laura and Rose both expect to become dreamhunters when they turn 15, legally old enough to try.  Laura’s father discovered The Place 20 years earlier, and Rose’s mother is a famous dreamhunter.  But only Laura has the ability to enter The Place, dividing the cousins just as mysteries and intrigues start to build up around them.  Laura’s father disappears, presumed dead, and Laura begins seeing a darker message within the dreams.

The concept of these books is so fascinating!  Knox has created a complex magical system around the dreams and how they work.  Dreams are grounded geographically in The Place, so dreamhunters can sleep in certain places and expect to catch certain dreams.  Dreamhunters have individual talents and abilities, like putting everyone around them to sleep when they sleep, or the ability to alter faces in dream characters.

Layered on the magical system is an economic system.  Dreams have become a business, with dreamhunters utilizing their talents at hospitals to soothe the sick, or in specially built Dream Palaces as entertainment.  On the darker side, dreams can be used for more sordid entertainment, or even as punishment.  I love all the detail around how a society decides to handle this extraordinary magic, turning it into an integrated part of the economy.

The concept was my favorite part, but the characters are solid as well.  Although we get glimpses of many characters, Laura and Rose stand out the strongest.  Rose is a natural leader, fierce, loyal and insightful.  Laura seems to be the more fragile of the two, physically and emotionally, but she’s the one who steps up to undertake an extraordinary task. 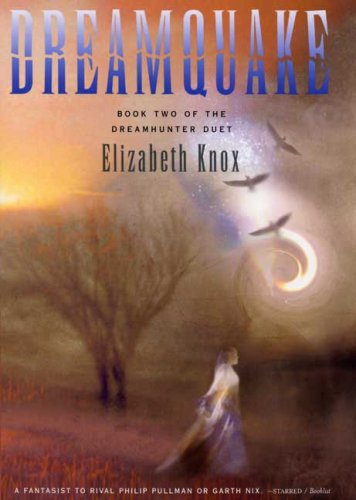 After rereading Dreamhunter, it amazes me that I didn’t go on immediately to the second book on my first read.  Dreamhunter ends with a climactic moment, but very little resolution.  Dreamquake picks up in the same moment…and gets hard to discuss without a lot of spoilers!  The tension and the stakes rise throughout the book.  What seemed like a vague social issue in the first book rises to a government conspiracy in the second.  The dreams also grow more and more sinister, with a more urgent message to impart.

Dreamquake becomes a fantastic puzzle.  It grows increasingly clear that some dreams are connected to each other, forming a larger narrative with a message at its heart.  I loved threading together the different pieces of the story, and learning the mystery behind The Place.  There was one important dream that fit in thematically but never fit into the narrative and that disappointed me a bit–but that was a minor flaw.

I originally started reading these because someone recommended Vintner’s Luck to me, but the library didn’t have it so I got a different Elizabeth Knox book.  Now that I’ve finally finished these two, and since they were so good, I think I ought to look into Vintner’s Luck again…

Other reviews:
The Book Smugglers
Gwenda Bond
Please Don’t Read This Book (who despite the name, recommended the books…)
Anyone else?

(I should note that Amazon has a blurb from Stephenie Meyer front and center for these books.  If that makes you want to read them, great; but if it doesn’t, don’t hold the quote source against them…)

5 thoughts on “Dreamhunter and Dreamquake”