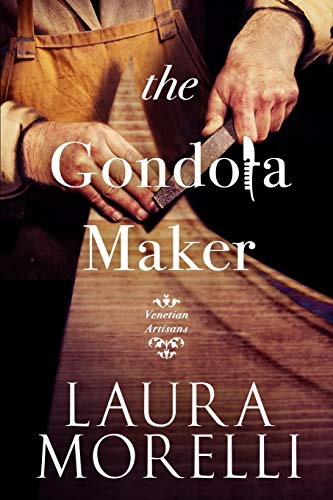 I have rarely read a book that was driven so much by atmosphere as The Gondola Maker by Laura Morelli.  Set in Venice in 1581, this is historical fiction with the emphasis on the historical, taking us inside the world of the craftsmen and gondoliers of Venice.

Luca’s path in life seems mapped-out and unavoidable, to follow in his father’s footsteps as one of Venice’s finest gondola builders.  But in a moment of rage, Luca makes a terrible mistake.  He flees his old life and his old identity, becoming a boatman on the docks.  He soon becomes private gondolier to Trevisan, a master painter, and there Luca finds two new obsessions: Giuliana, a beautiful girl in a painting; and an old gondola he vows to restore to beauty.

This is a slow book, but not in a bad way.  It’s clearly minutely researched, and Morelli pays great attention to description, especially of craftsmanship.  Many characters are artists, not only the painter but also all the men involved with the different pieces necessary to create a beautiful gondola, Luca included.

I find that I have great respect for Trevisan, mostly because of one observation Luca makes.  Trevisan is a highly successful painter, who takes pains to dress like the nobility (possible through an agreement with a costume-maker’s shop!)  Because of this, he has become accepted among the patricians, even though “he engages in what is, after all, manual labor, little different from how any Venetian glassblower, ironsmith, carver or other artisan spends his day.”

There’s a fascinating double-play here.  Luca lowers Trevisan’s status to the same as all of these professions (including his own), beneath the wealthy in status.  No doubt this was true in the historical social hierarchy!  And yet, the depiction of these other crafts throughout the book raises them, to the level I think a modern reader is likely to place a master painter in, as a genius and great artist.

But mostly I respect Trevisan for finding a way to rise above his ascribed status.  He is a painter, he doesn’t enter a different profession or somehow earn a title, but he’s able to earn respect and privilege above what should be expected for his class.  I love that.  Trevisan is a supporting character, but he may be my favorite anyway.

That may say something about the main character…  I have no dislike of Luca!  Mostly, though, I feel like he was the eyes we used to explore a fascinating world.  His story takes second-place to the world he’s moving through.

And that definitely says something about the romance.  It’s a big plot thread, and it does add some good intrigue and plot twists to the story.  But as a romance it just didn’t grab me.  I mean, Luca fell in love with the painting of the woman.  Even when he begins to interact with Giuliana herself, I never felt sure he appreciated anything about her beyond her beauty.  And that’s a real shame, because there are glimmers that Giuliana is a very intelligent young woman who is determined to chart her own course, beyond the control (none at all) that girls of the nobility typically had.

I would have loved to read this story from Giuliana’s point of view, or perhaps in a split viewpoint.  Giuliana is objectified by every man in the story, some more blatantly than others (normal for the era, I’m sure).  Unfortunately, I was never convinced that Luca wasn’t ultimately doing the same thing.  He acknowledges near the end of the book that he doesn’t really know her at all and that’s true!  There are hints that there’s so much more to her, and I wish we’d had the opportunity to really see that come through.

I actually liked Luca’s “love affair” with the restored gondola much better.  While he takes the living, thinking Giuliana and reduces her largely to a painting, he takes the inert piece of wood and raises it to something that feels almost alive.

So at the end of the day…this is a good book if you like a certain kind of story.  If that story is rich in history and art, and especially if you have an interest in Venice specifically, then I can recommend The Gondola Maker!

Other reviews:
The YA Lit Chick
Chronicles
Rosie Writes
Anyone else?

Buy it here: The Gondola Maker

Disclosure: I received a copy of this novel from iRead Book Tours in exchange for an honest review.

5 thoughts on “Visit Venice with the Gondola Maker”