You may remember I was reading my way through L. Frank Baum’s Oz series, reviewing in batches along the way.  You may remember, but I forgot for a few months that I never reviewed the last three!  So today I’m finally returning back to Oz to wrap that up…

I had to think quite a bit to find a common thread between the final three, and finally realized that the connection was Ozma—though not in quite the same way for each. (You would think Ozma of Oz would be part my Ozma Trilogy, but that’s really a Dorothy and the Nome King adventure.)  These three all have Ozma as a driving force of the story, in one way or another… 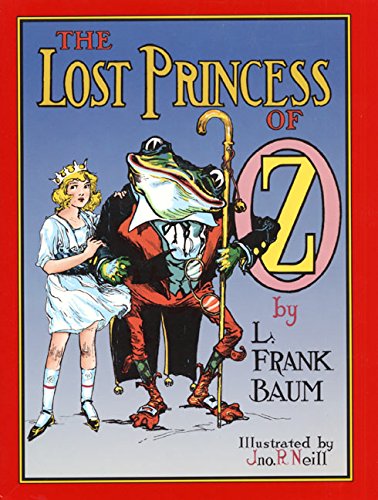 The Lost Princess of Oz has one of the most effective plots for putting something genuine at stake. Ozma has been kidnapped, the same day that many of the most powerful magical objects in Oz have gone missing. Handicapped though they are by their lack of tools, the characters set out in search of their beloved princess. Meanwhile in a far-corner of Oz, Cayke the Cookie Cook has been robbed of her diamond-encrusted dishpan, and sets off with the Frogman in search of it. Naturally all the events eventually tie together…

I’m inclined to think that Baum noticed his characters were growing too powerful (see the conclusion of Rinkitink in Oz), and in this book he takes steps to give them genuine obstacles. As a result, we get a true crisis, with real danger and a villain who could inflict actual harm. It never gets very dark—this is Oz after all—but a plot is more exciting when the characters have something to lose.

The Frogman is also a particularly interesting new character. He’s been ruling the Yips, who believe him to be wonderfully wise. He realizes all the time, however, that his wisdom is just an act.  This becomes a problem for him when he accidentally swims in the Truth Pond, forcing him to always tell the truth in the future. Though it’s treated fairly lightly, it creates an unusually complex problem for the world of Oz.

Ozma’s search party encounters some marvelously whimsical cities along the way, and finally encounters a villain with some real menace to him. This book also features one of the largest roles for Toto, who is here worrying about his missing growl, and wondering if it was stolen with everything else. 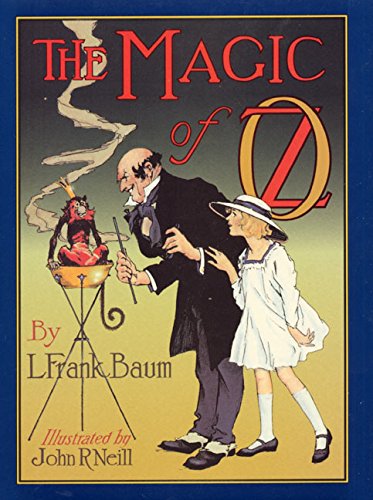 The Magic of Oz ostensibly centers on a search for birthday gifts for Ozma (earning it its spot in my Ozma Trilogy), but swiftly develops into more dramatic crises. Trot and Cap’n Bill’s search for a gift causes them to be trapped on a magic island, slowly shrinking away to nothing. Meanwhile the deposed Nome King is back to stir up trouble, joining forces with Kiki Aru, a Munchkin boy who stumbled on the ability to transform himself and others into creatures of his choice. They attempt to rally the animals to attack the Emerald City, and inflict transformations on many characters.

I enjoyed the return of an old villain with new power, and the Nome King’s attempt to conquer Oz this time is far more interesting than his previous one (where he pretty much gathered an army and marched). I always enjoy Trot and Cap’n Bill, and I think it may be because they actually worry. Dorothy is downright Pollyanna-like in her good cheer, while Trot gets into real danger at times and knows it, giving the reader a reason to care.

This installment also offers one of my favorite pieces of whimsical Baum magic, in the form of the magic flower, which is constantly in bloom in an ever-varying succession of different kinds of flowers. 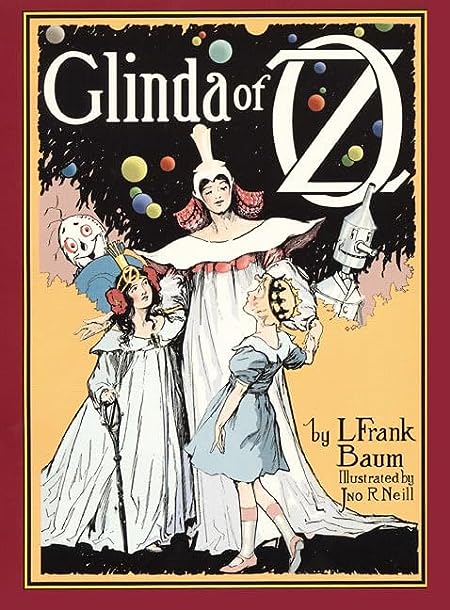 The final book in the series, Glinda of Oz, finally gives a starring role to a significant character usually on the sidelines. Not, as you might expect, Glinda—but rather, Ozma. She’s played an important role in other books, but this one gets her out of her palace and into the active role of heroine.

Ozma and Dorothy go to visit Glinda, and in her magical record book they read about a war happening in a far-off corner of Oz, between the Flatheads and the Skeezers.  As ruler of Oz, Ozma decides it is her duty to make sure all the people of Oz are happy, and therefore she must set off to stop this war. That’s all well and good, though I’m at a bit of a loss to understand why she has to go alone, with only Dorothy to accompany her! (Plot reasons, no doubt.)  The girls first visit the mountain of the Flatheads (who have flat heads, and carry their brains in jars—really!) and then go on to the island city of the Skeezers. When the city’s ruler submerges the island, Dorothy and Ozma are trapped within, and the rest of their friends, led by Glinda, must come to the rescue.

This book gives us more of Baum’s wild and whimsical cities. I suspect that Oz is sparsely populated in sections solely so that he could keep having the characters run across new, strange communities! Between the weirdness of the Flatheads and the fairy tale-like nature of three enchanted fish in the Skeezers’ lake, we get some of Baum’s magic at its most entertaining.

The book also succeeds where others have faltered (I don’t quite like to say “failed”) by giving the characters real dangers. Ozma and Dorothy aren’t likely to die, but they are very seriously inconvenienced by the submerged city, and there’s at least a hint of real danger from the Flatheads too.

If this book falters anywhere, it’s in Ozma herself. She’s so very well-meaning, but there’s still something problematic about her rulership of Oz. The Flatheads and the Skeezers have never heard of her, yet she insists on her right to rule them—insists it sweetly, of course. Baum has unfortunately set Ozma up as a hereditary dictator, as far as I can tell. Because she’s so kind and sweet and concerned for her people, it all works out…but I can’t help being bothered all the same!

Sometimes when it’s been a very long time since I read something, I reach the point where I feel like I can’t really have an opinion on it anymore.  I don’t remember it well enough, or I don’t know how present-day-me’s opinion would compare with long-ago-me’s opinion. I had reached that point with Oz, so I’m glad to have gone through the entire series, so that I can comment on them again!

The 14 books unquestionably vary in quality, and even the best aren’t without flaws (which my younger self probably didn’t notice). But—with that said—these are still, by and large, delightfully whimsical classic fantasy. Baum’s strength is in weird and wonderful magical creatures, and some of his creations stayed with me through all those years I wasn’t reading the books.

Apart from the later books including characters introduced earlier, these books are largely self-contained. They’re fun to read in order, but once you’ve read the first three (which introduce most of the major characters) you could pretty easily get away with jumping around. Just in case you want my opinion on the matter, here’s my ranking of the books by quality… (with series order after the title)

This is, of course, highly subjective…so if you’ve read any of the series, I’d love to hear your favorites too!

9 thoughts on “The Ozma Trilogy”