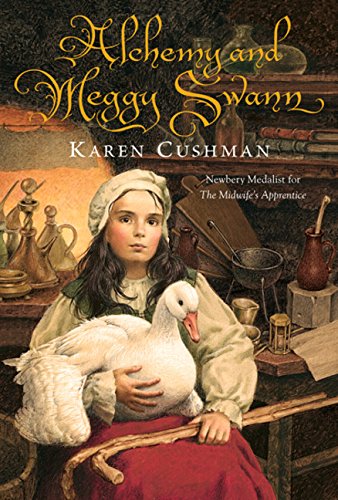 I rarely pick a paper book up randomly anymore, but I do browse for audiobooks sometimes.  That’s how I landed on Alchemy and Meggy Swann, because it’s by Karen Cushman and I thought that was a good indicator.  And then after I had checked it out, I discovered it was being read by Katherine Kellgren–which would have sold me on it anyway!  This also is a nice pick for my largely-ignored goal this year to read more historical fiction.

Meggy comes to London in the mid-1500s, summoned by a father she’s never known.  Master Ambrose is an alchemist, consumed by his “great work,” who had hoped for an able son to help him.  Besides being female, Meggy is crippled from birth, only able to walk with the aid of two sticks.  Ignored by her father, Meggy has to find her own place in the loud, sprawling city of London.

Meggy goes through an excellent evolution throughout the book.  As it begins, she’s sympathetic but not very likable.  No one (except her grandmother) has ever been kind to her, and she meets the world now “with her fists up,” ready to give as good as she gets.  She gradually softens, as small acts of kindness back and forth build up tentative friendships with a few people around her.  She loses her fierce anger, while gaining self-confidence and appreciation for her own worth.

One of Meggy’s first friends is Roger, her father’s former apprentice who has now joined a theatre company.  Meggy is not eager to be friends and he’s perfectly willing to spar back.  The range and creativity of the insults they exchange would make Shakespeare proud!

Meggy’s character arc was the part that really seized me, but there’s also a bit of a conspiracy plotline, and a lot of good historical information too.  This isn’t built around any major historical events, but the atmosphere of 1500s London is very strong, with the crooked streets, the crowds, and of course–the stenches!  Like Cushman’s best-known book, Catherine Called Birdy, this one never skimps on the dirtier side of life in the past.  There’s a lot on alchemy too, and the quest for the Philosopher’s Stone.  I don’t have a lot of scientific knowledge, but I knew enough to know where the alchemist was going wrong in his interpretation of what his experiments told him.  It was interesting to see what learned men of the day thought they knew–and to wonder what people 500 years from now will think of our science!

This was a very engaging book and, almost needless to say, Katherine Kellgren’s reading was as excellent as ever.  I now want to read more Cushman books!  A reread of The Midwife’s Apprentice, I think, and I’ve been meaning to read Will Sparrow’s Road…which should be good for that historical fiction reading goal…

4 thoughts on “Alchemy and Meggy Swann”