Somewhere earlier during the Once Upon a Time challenge this year, I read Half Upon a Time by James Riley.  I didn’t love it, but it had some intriguing parts to the ending, so I decided to go ahead and plunge into the second and third books in the trilogy.  And I thought I’d better plunge quickly before I forgot the details of the characters and the plot twists!  I didn’t love the later books either, but I do think they improved as they went, and overall I found the trilogy to be a pretty fun ride.

The first book introduced us to Jack, who considers himself more clever than heroic; May, a girl from our world who suddenly landed in Jack’s land of fairy tales; and Philip, a very proper handsome prince.  The second book, Twice Upon a Time, opens with the three of them searching for answers about May’s past, and for a way to defeat the Wicked Queen.  Their quest takes them to the Fairy Homeland (which has fallen under a Sleeping Beauty-style curse, thorns and all), into a slightly twisted Neverland, onto Blackbeard’s ship and under the sea, searching for a little mermaid.

As you can tell, this followed the style of the first book, mashing together familiar fairy tales and classic fantasy.  Riley mostly doesn’t retell stories–instead he takes the characters and gives them a new slant, or explores what might have happened to them after the traditional story ended.  Things get a little convoluted in the process, but there are some clever (and funny!) twists as a result.

The plot was entertaining, although at times I felt we were drifting pretty far from the main conflict, the fight with the Wicked Queen.  However, each individual adventure is pretty cool, so as long as you roll with it a bit, it works! 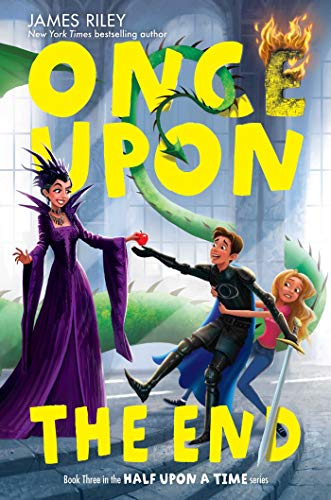 The third book, Once Upon the End, brings the Wicked Queen back to the center of the story.  There are fewer mashed together fairy tales (though we do get quite a bit of “Jack and the Beanstalk”), with the focus much more on Jack, May and Philip, and some very hard choices they each have to make about if, and how, they’re going to take a stand against the Wicked Queen.

That brings me nicely to why I think these books improved throughout the trilogy–the characters.  My main reservation on the first one was that the characters just didn’t grab me, feeling like basic fairy tale archetypes (even may as the “spunky princess”).  Fortunately, they gained more depth.  Philip was the one I most disappointed by, and he had the most satisfying growth.  He stayed the proper prince–but we got into the conflict of how hard it could be to always be noble and honorable and honest and good.  And what happens when two noble causes conflict, or the greater good requires a dishonorable act.

Jack got more interesting too, as he went on what was essentially a hero’s journey, finding his skills and his strength.  This was particularly apparent in the third book, where circumstances at one point make it very clear how far he’s come.

May, I am sorry to say, got more obnoxious in the second book, or so it felt to me.  However, she reined that back a bit in the third book, and went through some more complex character growth around who she can trust, and how to protect her friends.

The third book also gave us Penelope, also known as Sleeping Beauty.  And she was amazing!  She uses cursed spindle splinters as weapons!  And she gives Philip a stern lecture on how sometimes, he just needs to back off and let her handle things because she has a plan and he is not helping by swinging his sword around.  Penelope was not in this book enough, and I want another one about her.

I think this trilogy rides somewhere in between Middle Grade and Young Adult–the characters are sixteen which seems to imply YA, but the style feels a bit more Middle Grade.  A little lighter and a little simpler–so if you enjoy that, and fairy tale mash-ups, and are willing to ride with a little randomness…then this is just the trilogy for you!

Other reviews:
Best Kids’ Reads
Carstairs Considers
Michelle I. Mason
Anyone else?

Buy it here: Twice Upon a Time

and Once Upon the End