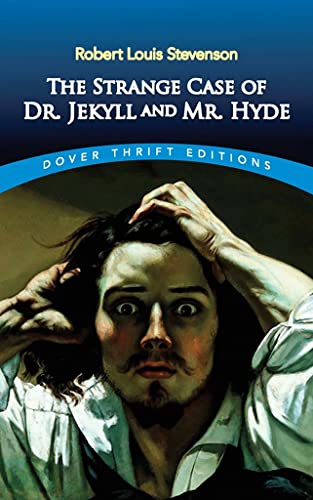 After not enjoying The Invisible Man, it may seem a little odd that I went on to Dr. Jekyll and Mr. Hyde. I think I’m determined to find some piece of classic sci-fi/horror that I can like!  And it’s the right time of year, with R.I.P. going on.  Jekyll and Hyde was written by Robert Louis Stevenson, and I always have trouble keeping that in mind—it feels like such a completely different book than Treasure Island. It feels much more like it ought to be part of the canon of H. G. Wells. Unfortunately, that includes some of Wells’ issues!

Jekyll and Hyde is fascinating to read from a historical perspective–because I think it’s a book that’s been ruined by its own success. Do I even have to say “spoiler alert” before mentioning that Jekyll and Hyde are one person? Everyone knows that—and unfortunately that’s the one big mystery of the book!

The story is told almost entirely from the point of view of Mr. Utterson, who is concerned by erratic behavior from his friend, the kindly Dr. Jekyll, who seems to have fallen under the influence of a mysterious, repugnant little man called Mr. Hyde. Some three-quarters of the way through the book, Jekyll’s private notebook falls into Utterson’s hands, and there we finally have the story from the title character himself—and the “shocking” revelation that Jekyll and Hyde are one person, two parts of one personality split by scientific means.

Unfortunately, the entire book is a mystery that, most likely, every reader now knows the answer to when they begin. And that doesn’t leave a lot left for the story to hang on! Jekyll and Hyde is also burdened by the writing conventions of its time, and that’s where it shares a lot of problems with The Invisible Man. Both books have a title character who is by far and away the most interesting and most important figure…but we spend most of the book in the point of view of comparatively bland and unimportant supporting characters. Both books become significantly better when the title character finally gets to tell the story…and since that’s the only important part, I think both books would have been better if they were much shorter! At that, Jekyll and Hyde comes in ahead of The Invisible Man, because it’s only about a third as long.

I liked Jekyll and Hyde generally better than The Invisible Man, because at least Utterson grounded us as a protagonist, and the plot had more of a clear focus in the mystery. The last portion from Jekyll is much more interesting, about his struggle between conflicting sides of his personality, and his…rather unique solution. I’m sure if the book was written today, that portion, and all the psychological complexity of it, would be the main focus of the book.

Unfortunately, that isn’t how Stevenson wrote it…  I wouldn’t say that it’s a bad book exactly, but it is a book that is mostly interesting now as a way to see where the idea originally came from. And somewhat in that vein, I think I’ll go the other direction now and see if the Spencer Tracy movie is better. The Claude Rains Invisible Man was better than the book!

Other reviews:
Midnight Coffee Reader
More Than Just Magic
Pajiba
Anyone else?

Buy it here: The Strange Case of Dr. Jekyll and Mr. Hyde